Consuming Raw Red Beans and Rice can Make You Sick

Scientists have discovered how lectins, a family of proteins believed to be a natural insecticide that is abundant in undercooked legumes and grains, can make you feel temporarily miserable.

"It's known that it can be a toxin," Dr. Paul L. McNeil, cell biologist at the Medical College of Georgia, says of the lectin protein that's commonly found in vegetables. Lectins, which bind strongly to carbohydrates that decorate cell surfaces, have a particular affinity for the heavy-carbohydrate coats of epithelial cells that line the gastrointestinal tract.

Researchers have long known that ingesting too much undercooked lectin can cause nausea, diarrhea and vomiting. What they didn't know was how lectin caused food poisoning.


Work published Aug. 1 in PloS One shows lectins disable GI tract cells, which are constantly bombarded while digesting food, from repairing tears in cells walls from all the activity. Repair normally occurs in seconds: internal membranes move up to patch the tear, the cell recovers and the one-cell layer lining of the GI tract remains intact.

"If those individual cells cannot repair tears, they die," says Dr. McNeil. "That means you have gaps in the integrity of the surface area of the epithelium and you are exposing the nasty internal world of your GI tract to your blood supply."

The epithelial lining is a continuous, natural barrier between digesting food in the GI tract and the blood supply. When intact, it allows only good stuff like nutrients to pass through.

"Your body senses that lack of barrier function and tells you to eliminate the entire contents of the GI tract," says Dr. McNeil, noting that lectin's apparent role as a natural insecticide and as a source of food poisoning are related. "If you get vomiting and diarrhea you are going to eliminate the entire contents of your gastrointestinal tract, right" And, you are not going to eat red beans again the next day, right" That is probably the point if they are natural insecticides. Alcohol will do the same thing. When you drink too much alcohol, you can destroy the lining of your stomach."

But the scientist who first identified how injured cells patch themselves says lectin blocks this repair mechanism better than anything else he's seen. Interestingly, he and his colleagues showed in PloS Biology in 2006 how roughage - which includes beans - help people stay "regular" by causing more cell tears, which enables more mucus to escape from cells, essentially greasing the GI tract.

In fact, they discovered lectin's role in stopping cell-patching and mucus release while researching roughage. The multipurpose lectin is a powerful stain the team used to look at mucus released by cells after tearing. They found if they used too much lectin there was no patching or mucus, just cell death.

"Biologically it's interesting because it might tell us more about the mechanism of repair," says Dr. McNeil, who wants to learn more about how lectin interferes with repair. "We know the mechanism involves surface binding because you can add lectin and the cells can't repair. You take the same culture of cells, wash the lectin away, injure other cells in the culture and they repair fine. We also know it's a very rapid, surface-initiated inhibition."

In addition to the immediate discomfort undercooked beans and rice can cause, long term concerns ingestion of lectin has also been linked to colorectal cancer and celiac disease, a common problem in which individuals are sensitive to gluten, a mixture of proteins derived from wheat flour that includes lectins. The small intestine of the celiac sufferer is unable to properly absorb nutrients after gluten ingestion.

Oddly, in a laboratory dish, safe from mechanical stresses that cause surface tears, lectin can make cells divide, "which is quite the opposite of making cells sick," Dr. McNeil says. A recent Science paper implicated lectin in diabetes as well.

"It's possible that this bioactive property of lectin that binds to our cells could have long-term consequences taken even in small amounts," he says, noting that thorough cooking destroys most but not all lectin. "Maybe the bloating and gas is telling us something about lectin when it's just a minor irritation."

He notes lectin is easily among the top-10 causes of food poisoning but is unlikely to be lethal because the body is so good at sensing the break in the GI barrier and eliminating the problem.

Too Much White Rice, Pasta and Bread may Increase Chances of AMD
A study has revealed that high consumption of foods like white rice, pasta and bread, which have high-glycemic-index, increase the chances of developing age-related macular degeneration (AMD).
READ MORE

Targeted Food Tax to Improve Health
A study in the Journal of Epidemiology and Community Health daily pinta or a helping of dairy foods protect against the clustering of abnormal body chemistry known as the metabolic syndrome.
READ MORE

Meanie In A Bottle Botulism Threat in Canned Beans
The Canadian Food Inspection Agency (CFIA) has placed on red alert, warnings on two types of chili, because they could be contaminated with the bacteria that cause botulism.
READ MORE 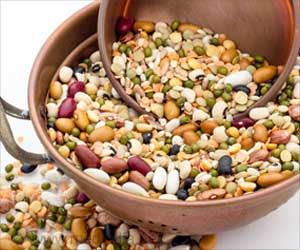 Health Benefits of Beans
Like most legumes, beans are popular across the world and are a good source of protein and carbs. Here are some of the health benefits of beans.
READ MORE