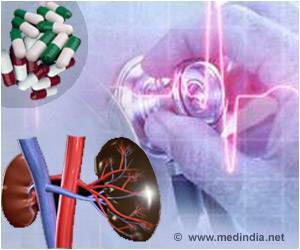 Worldwide, increasing numbers of older patients are developing kidney failure, or end-stage renal disease (ESRD), that can be treated with renal replacement therapy such as kidney transplantation or dialysis.

A new study found no significant survival advantage among elderly kidney failure patients who chose dialysis over conservative management. The findings, which appear in an upcoming issue of the Clinical Journal of the American Society of Nephrology (CJASN), indicate that conservative care may be a reasonable choice for selected older patients.

Adulteration of food with melamine results in the formation of kidney stones and kidney failure, even leading to death.
Advertisement
‘There is no significant survival advantage among elderly kidney failure patients who chose dialysis over conservative management.’

Some experts have questioned whether older patients, who often have other medical conditions, are likely to benefit from renal replacement therapy options and should instead opt to be treated conservatively, with care that includes control of fluid and electrolyte balance, correcting anemia, and providing appropriate palliative and end of life care.


To look at the issue, a team in the country where hemodialysis was originally invented compared survival in older patients with ESRD who chose either dialysis (204 patients) or conservative management (107 patients) between 2004 and 2014. In this single-center observational study, investigators led by Wouter Verberne and Willem Jan Bos found no statistically significant survival advantage among patients aged more than 80 years who chose dialysis over conservative management. In general, patients with additional medical illnesses died sooner than patients without comorbidities.

Chronic renal failure or chronic kidney disease is progressive loss in kidney function. The change is irreversible and is due to loss of nephrons of the kidney.
Advertisement
"We do not conclude that dialysis treatment should not be given to anybody aged more than 80 years or with severe comorbidity, but we show that the treatment is on average of little advantage regarding survival," said Dr. Verberne. "Our next task is to predict who benefits and who does not. Until we are able to give a better prediction of the results of dialysis treatment at high age, we can merely suggest that conservative management is an option which should honestly be discussed when ESRD is approaching." Dr. Verberne added that more research is needed to determine how different treatment options affect patients' other outcomes, such as quality of life and severity of symptoms.

In India, a majority of patients who undergo hemodialysis die or stop treatment because of financial constraints within the first three months.
Advertisement
<< Highly Specialized High School Athletes More Likely to Have...
4-Drug Tuberculosis Treatment Among HIV/AIDS Patients Does ... >>