Consensus on Diagnosis and Treatment of Bleeding Disorders in Women Reached

Women who have excessive bleeding after their menstrual cycle, may have underlying diseases that are underdiagnosed simply because bleeding from the reproductive tract is a naturally occurring event during menstruation and childbirth.

In order to address important issues related to the diagnosis and management of reproductive tract bleeding in women with bleeding disorders, a consensus conference was convened. Results are published in the July 2009 issue of the American Journal of Obstetrics & Gynecology.

The goals of the consensus conference were to highlight the problems these women experience and to provide clinical information and recommend strategies to guide practicing obstetricians and gynecologists. Where the international panel of experts in obstetrics, gynecology and hematology reached consensus, recommendations were made.


Von Willebrand Disease (VWD) is the most common inherited bleeding disorder. VWD results from a deficiency in, or a dysfunction of, von Willebrand factor (VWF), a protein necessary for normal platelet adhesion and protection of factor VIII (FVIII) from proteolysis in the circulation. The prevalence of menorrhagia in women with VWD is 74-92%.

Although the majority of women who present with menorrhagia do not have a bleeding disorder, the conference participants identified more than a dozen symptoms that suggest further evaluation, including menorrhagia since puberty, a family history of a bleeding disorder, and personal history of one, but usually several, of the following symptoms: nosebleeds (generally bilateral for more than 10 minutes), more than once in the past year; notable bruising without injury (and with bruises >2 cm in diameter); minor wound bleeding from trivial cuts lasting for more than 5 minutes; or prolonged or excessive bleeding following dental extraction.

Writing in the article with her co-authors, Andra H. James, MD, Women's Hemostasis and Thrombosis Clinic, Duke University Medical Center, Durham, NC, states, "Obstetricians and gynecologists should be aware of bleeding disorders such as VWD, rare bleeding disorders and platelet disorders, which remain underdiagnosed in women with menorrhagia and potentially in other cases of abnormal bleeding such as postpartum hemorrhage. Clues, including a family or personal history of bleeding events, should provoke suspicion of an underlying bleeding disorder. Responding to these clues facilitates collaboration among obstetrician-gynecologists and hematologists that could lead to a decrease in the diagnosis of "idiopathic" menorrhagia and allow more effective management of bleeding events." 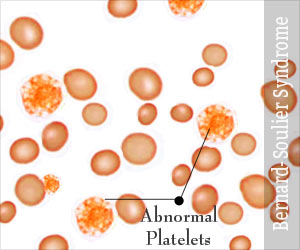 Bleeding (Hemorrhagic) Diathesis
Bleeding diathesis is a severe condition characterized by an increased tendency of the body to bleed.
READ MORE