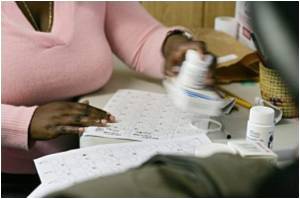 A link between HIV infection and risk of overdose has been analyzed by researchers. Findings of the study show a 74 percent greater risk of overdose among drug users if they are HIV-infected. The researchers found that reasons for the increased risk are biological and behavioral, but may also include environmental and structural factors. The study is now available online in advance of print in the journal AIDS.

Drug overdose is a common cause of non-AIDS death among people with HIV and is the leading cause of death for people who inject drugs. People with HIV are often exposed to opioid medication as part of their treatment, while others may continue to use illicit opioids despite their disease status. Both scenarios present a heightened risk for fatal and non-fatal overdose. While the association between HIV infection and injection drug use has been well documented, the potential association between HIV and overdose has received less attention.

With this in mind, Traci Green, Ph.D., M.Sc., a researcher with Rhode Island Hospital and the Lifespan/Tufts/Brown Center for AIDS Research, led a study to systematically review the literature on the putative association of HIV infection with overdose, meta-analyze the results and explore the causes.


Green reports that 46 studies were reviewed, and 24 of those reported data that were sufficient for inclusion in their analysis. Based on those studies, Green says, "Our results suggest that people who use drugs have a 74 percent greater risk of overdose if they are HIV-infected compared to their counterparts who are not HIV-infected. Over the past 30 years, we have made impressive strides in caring for and prolonging the lives of people with HIV. Our study found that premature death by overdose is an issue that affects people with HIV disproportionately."

Do you know that there are symptoms for each stage of HIV/AIDS? Learn more from our HIV Symptom Quiz but here's a disclaimer - never go by symptoms alone. Symptoms only indicate the progression of the disease, while only a medical test can confirm it.
Advertisement
"It is not entirely clear why the risk is greater, and few studies have endeavored to figure out why this might be happening," Green points out. Biological explanations for the association could include clinical status, immunosuppression, opportunistic infections and poorer physical health in this population, while several studies posit that conditions that affect body's ability to metabolize, like hepatitis C infection, may also increase the risk of overdose. Behavioral factors include high-risk lifestyles and psychiatric comorbidities that might be greater among HIV-infected than HIV-uninfected drug users.

Green further explains that other reasons for the association may include factors such as poor access to medication-assisted therapy to treat opioid dependence, homelessness and poverty, which may contribute to a higher risk of overdose.

Through their research, Green reports that there are ways to reduce the increased risk of overdose among this population. Green comments, "The good news is that we already have several cost-effective overdose prevention tools to call upon. The first is access to highly active antiretroviral therapy (HAART) medications, prescribed by providers prepared to prevent and manage potential interactions between antiretrovirals and drugs with abuse potential. The second is medication-assisted therapy, and in particular, methadone and buprenorphine therapies, which have been shown to protect against fatal overdose. The third tool is distribution of Naloxone (Narcan), a prescription medication with no abuse potential that reverses an opioid overdose, to people who are HIV positive and use opiates.

Green adds, "Bringing overdose awareness and prevention into the HIV care setting is critical to reducing overdose deaths. Health care providers who treat HIV-infected patients with a history of substance abuse or who are taking opioid medications should consider counseling patients on how to reduce their risk of overdose. They may also consider prescribing Naloxone to patients, or offering a referral to MAT to reduce the risk of overdose."

Medically prescribed opioids like Oxycontin and Vicodin have become popular among Americans to deal with chronic pain not caused by cancer.
Advertisement
<< Link Between Myotonic Muscular Dystrophy and Increased Canc...
New Software to Treat Pain and Epilepsy >>