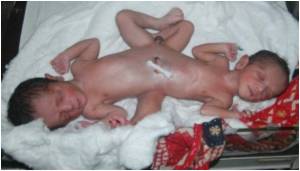 Reports said that conjoined 15-month-old twins attached at the pelvis and sharing three legs were successfully separated at a Malaysian hospital in a complex 24-hour operation.

The boys, Muaiman and Muaimin Azli, were separated at Hospital Kuala Lumpur in an operation involving a 60-strong medical team, including 19 surgeons and anaethetists, The Star reported.

"With proper rehabilitation, both boys can lead a fairly normal and independent life," Zakaria Zahari, the head of the paediatric surgery at the government hospital was quoted by The Star as saying.


Zakaria said the case was the hospital's most complex so far because the twins shared genitalia and a bladder.

"The sexual and reproductive functions of both twins will be assessed further as they grow," he said.
Advertisement
Both boys are in a stable condition following the July 14 operation. Muaimin will get a prosthetic leg, while Muaiman will keep both of his legs.

"For now, I'm just glad that they are safe," the twins' father, 40-year-old mechanic Azli Sabran, told The Star.

A hospital official confirmed the surgery was successful but could not immediately provide further details.

The twins are the 14th conjoined pair to be separated at the hospital and the 21st in the country, according to The Star.

Zakaria said one in every 250,000 to 500,000 live births in Malaysia, which has a population of 28 million people, involved conjoined twins but not all survived, especially if they were joined at the heart.