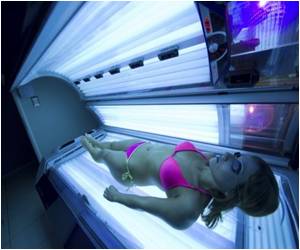 Study confirms indoor tanning increases the risks of developing non-melanoma skin cancer (known as basal cell carcinoma and squamous cell carcinoma), especially among those exposed before the age of 25. The study is published on http://www.bmj.com.

It follows a BMJ study published in July that showed 3,438 (5.4%) new cases of melanoma diagnosed each year in Western Europe are related to sunbed use, particularly among young adults.

Basal cell cancer is a locally invading cancer. It often occurs on the face above a line joining the angle of the mouth and the ear lobe.
Advertisement

Some experts are now calling for Europe to follow the example of the United States by introducing a "tan tax" on indoor tanning salons.


The researchers, led by Professor Eleni Linos at the University of California San Francisco, estimate that indoor tanning may account for over 170,000 cases of non-melanoma skin cancer in the US alone.

Encyclopedia section of medindia gives general information about skin biopsy.
Advertisement
Cases of non-melanoma skin cancer have increased dramatically over the last few decades. Although not as lethal as melanoma, they affect a vast number of people worldwide and are a substantial financial burden to healthcare systems. Several studies have examined the link between non-melanoma skin cancer and indoor tanning, but have yielded varied results.

So Professor Linos and her team set out to review the evidence. They analysed the results of 12 studies involving 9,328 cases of non-melanoma skin cancer (7,645 basal cell carcinomas and 1,683 squamous cell carcinomas).

Further analysis of the data, and adjustment for factors that may have affected the results, did not substantially alter the findings.

The authors say their findings point to a possible causal link between indoor tanning and non-melanoma skin cancers and they estimate that indoor tanning "may account for hundreds of thousands of new cases each year in the United States alone."

They conclude: "We hope that these findings can support public health campaigns and motivate increased regulation to reduce exposure to this carcinogen, especially during early life."

In an accompanying editorial, experts from the Queensland Institute of Medical Research in Australia say these two new reviews "provide more convincing evidence that exposure to artificial ultraviolet radiation is a cause of the three main skin cancers."

They say that regulations on the sunbed industry "must be tethered to warnings by health professionals and educators about the risks of indoor tanning" and suggest that "young people in particular should be made aware that the use of sunbeds for short term cosmetic tanning carries the long term price of an increased risk of skin cancer."

"The EU needs to follow the example of the United States by introducing a so called tan tax on indoor tanning services," says Simon Williams from Northwestern University in Chicago in a personal view article. He estimates that, in the UK, a 10% excise duty on indoor tanning could raise revenues of between £95m and £113m over a decade.

Although he argues that a 10% tax "is likely inadequate from a public health perspective" he believes it is "essential as a starting point for future tax increases, and as a means of acknowledging that indoor tanning, like tobacco, is a primary tier carcinogen that warrants its own sin tax."

Squamous Cell Cancer of the Skin

Post-Nasal Drip The Essence of Yoga Drug Side Effects Calculator Drug Interaction Checker A-Z Drug Brands in India Noscaphene (Noscapine) Color Blindness Calculator Accident and Trauma Care Blood - Sugar Chart Blood Pressure Calculator
This site uses cookies to deliver our services. By using our site, you acknowledge that you have read and understand our Cookie Policy, Privacy Policy, and our Terms of Use