Confessions of Spanish Adolescents: 60% Not into Drugs and Seldom Booze 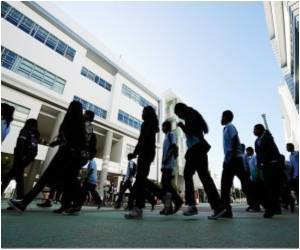 Amid banal charges on adolescents' habits, a study by the University of Seville reveals most youngsters do not have a risk profile of substance abuse. Some 60% of Spaniards aged 13 to 18 say they do not take drugs and rarely drink alcohol - only in moderation - and at the same time, less than 10% admit to have taken some form of illegal drug.

"Although it is important that society, the media, the experts involved and young people themselves change the stereotype of adolescents taking drugs, the data from our study should not be seen as an excuse not to prevent substance use" Pilar Ramos, teacher and researcher at University of Seville highlighted.

Her research, which forms part of the 2006 edition of the study Health Behavior in School-aged Children (HBSC), presents the data for drug use from a sample of 15,942 Spanish adolescents, 46.7% of which were male, aged 13 to 18, from 375 different educational institutions.


The researchers conducted a questionnaire about substance use, biopsychosocial adjustments and the contexts of development. They were asked about the frequency of tobacco, alcohol and cannabis use, intoxication and consumption of other illegal drugs, such as designer ones (ecstasy or 'pills', LSD, acid) amphetamines or speed, opiates (heroine, methadone) medication to 'get high', cocaine, glue and others.

Several drugs are either banned or withdrawn after introduction in the market.
Advertisement
The project shows that after alcohol and tobacco, the substance most popular amongst adolescents is cannabis. In fact, Spain, joint with Wales, is the country with the third highest rate of cannabis use by young people, after Canada and Switzerland.

The friendship group is fundamental for the analysis

The study also includes drug use in friendship groups. "The measures show that teenagers that take drugs are less satisfied at school and with their families. However, the friendship environment is where these young people feel most satisfied. In this respect, this project also verifies the direct relationship between the level of substance use by young people and their friends. This is one of the reasons why analysing their friendship groups is important when studying youth substance use" Ramos states.

"Along similar lines, a recent study carried out within the same research project has compared the influence of the social environment in tobacco consumption amongst Spanish and English adolescents. The conclusions show that the fact that their best friend smokes is considerably more relevant than any other person in the adolescent's development, such as parents or siblings" the researcher asserts.

The differences in geographical areas are minimal

"Although there are no significant differences between provinces, a fact that is repeated systematically in tobacco, alcohol and cannabis consumption studies is the low rate in adolescents from Ceuta and Melilla. However, regarding Spanish regions with higher levels of consumption, the differences are less clear" Ramos says.

The north-eastern part of Spain, especially Aragón and Catalonia, are those which have consumed tobacco and cannabis "slightly more regularly" than the other regions. The same occurs with the prevalence of alcohol use, although in this case adolescents from the Balearic Islands are the ones that have tried alcohol more frequently, followed by those from Aragón and Catalonia.

According to the scientists, the measures to reduce drug use could be grouped into three areas of intervention: putting in place better and further reaching measures to regulate and control access to these substances (especially alcohol) for the younger population, extending prevention programs and promoting responsible consumption; and finally, improve the coherence and continuity in different environments where young people grow and develop. They conclude that "in other words, there should be good relationships in different contexts of development: family, school and friends."

Adolescent depression is an ailment that occurs during the teenage characterized by persistent melancholy, disappointment and loss of self-esteem.
Advertisement
<< Air Pollution Tied to Stroke Risk
Brief Hospitalisation for Knee Replacement Related to Greate... >>

Drug Side Effects Calculator Post-Nasal Drip Loram (2 mg) (Lorazepam) Accident and Trauma Care Calculate Ideal Weight for Infants Diaphragmatic Hernia Noscaphene (Noscapine) Sinopril (2mg) (Lacidipine) Sanatogen Iron Intake Calculator
This site uses cookies to deliver our services. By using our site, you acknowledge that you have read and understand our Cookie Policy, Privacy Policy, and our Terms of Use