Concern for the Future of Their Only Stud, Horse-loving Gagauzia Bonds With Russia 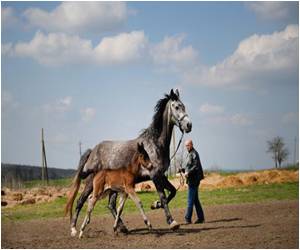 People of Gagaunzia create an emotional bond with Russia as these southern Moldova people have an in-born passion for horses.

"I have loved horses since I was small, my father, my grandfather and great-grandfather were all in the trade," says Constantin Keles, 54, a breeder at the country's only stud farm.

Use of Power Drill During Surgery Triggers Outcry in Moldova

Doctors in the former Soviet republic of Moldova used a power drill to perform a surgery on a teenager.
Advertisement

Dressed in a leather jacket, he opens the stable doors on the farm in Ceadir-Lunga and reads out the names of his much-loved steeds as he walks through: among them are Jean-Paul Belmondo, named after the French actor, "the president" and "the Queen".


Keles says he can trace the genetic origin of all 63 horses at the stables all the way back to 1780, and they are all Russian.

The stable was built when this green and hilly region bordering Ukraine was still a part of the Soviet Union. Watching the crisis that has gripped Ukraine, many in Gagauzia find themselves torn between East and West and hope they might return to Moscow's fold.

Moldova to Abandon Plans to Ban Gay Propaganda for Minors

With one eye on gaining entry into the European Union, the Moldavian government revealed that it will not be imposing a ban on the promotion of homosexuality to minors.
Advertisement
Currently an autonomous region within Moldova, the 160,000 people who live in Gagauzia, mostly ethnic Turks who converted to Orthodox Christianity in the 19th century, speak Russian and many feel closer ties to Russia would mean a better life.

Fearing for the future of his horses is another emotional factor drawing Keles' allegiance towards Russia.

He worries about the indifference of pro-European Moldovan authorities, who are looking to privatise the business and provide only sparse funding for stud farming -- the stables have been without electricity and low on food for months.

"The horse is an important part of our national culture. Private investors have only one interest: making money in the quickest time possible. They could decide to close the farm, or use it to breed ostriches, as has happened elsewhere," he said, recalling the failure of other privatisations in the former Soviet republic, which is now the poorest country in Europe.

Since 1982 more than 500 animals have passed through this stud farm, all of them descended from a Russian breed famed for its strength and elegance, the Orlov trotter.

In a field just outside Gagauzia's capital Comrat, Vitalie Tchakusta trains for hours with his horse, Lepistock, whose name means "little leaf" in Russian, preparing for the May 6 Gagauz festival dedicated to the horse, called Hederlez.

"If Ceadir-Lunga is privatised, this festival will no longer happen," he said.

The mayor of Comrat, Nikolai Dudoglu, says he hopes a solution will be soon be found.

"The Moldovan government should cancel plans to privatise the stud farm, and pass it to the Gagauzia administration," he said from his office, where one wall features a painting of a black horse.

"The name Comrat comes from the Turkish "komur at", which means 'horse as dark as coal'," he says, explaining that the town was named after a famous horse from the 18th Century.

"We have the best horses and the best trainers, all we lack is the money to build an equestrian school," said Ivan Mardari, a member of the Gagauzia Assembly.

As much as hopes for the future, it is the desire to preserve the past that drives antagonism towards Moldovan rule.

"Horses have accompanied us throughout the length of our history," said Keles.

"When we made our houses out of mud, when we worked the land, when our young people went to ask their fiancee for their hand in marriage -- horses were always there. This is a tradition we need to preserve."

Former world number one Martina Hingis has revealed that there are a few things that she just cannot live without.
Advertisement
Advertisement
This site uses cookies to deliver our services.By using our site, you acknowledge that you have read and understand our Cookie Policy, Privacy Policy, and our Terms of Use  Ok, Got it. Close
×

Concern for the Future of Their Only Stud, Horse-loving Gagauzia Bonds With Russia Personalised Printable Document (PDF)