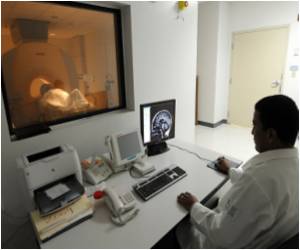 An experimental study shows that standard head movements made while exposed to one of the three electromagnetic fields produced by a heavy duty MRI scanner seem to temporarily lower concentration and visuospatial awareness. The study is published online in Occupational and Environmental Medicine.

The effects were particularly noticeable in tasks requiring high levels of working memory, which may have implications for surgeons and other healthcare staff working within the vicinity of an MRI scanner, the research indicates.

Nothing Black and White About Colours, Hull Proves

Some people possess the ability to hallucinate colours at will even without the aid of hypnosis, state the findings by scientists at the University of Hull.
Advertisement


The static magnetic field is always present, even when no imaging is taking place.

Thirty one volunteers made standard head movements within the static magnetic field of a higher field 7 Tesla MRI scanner at exposure levels of zero (sham), 0.5 (medium), and 1 (high)Tesla, in a random order, one week apart.

Got a Cochlear Implant? Stay Away from MRI Machines!

People with cochlear implants should avoid undergoing scans via magnetic imaging devices, such as 3T MRI machines, because scientists have now found that the machines can demagnetise
Advertisement
After each exposure level, the volunteers were set 12 timed cognitive tasks, designed to test the sorts of skills that a surgeon or other healthcare professional might need to deploy within the vicinity of an MRI scanner.

These included visual tracking and movement, as well as more general functions, such as attention, concentration and working memory. The tests were neutral in that they didn't test intelligence or depend on practice.

In all, 30 volunteers completed all three sessions. Compared with the sham test, the results showed that the more general functions, such as attention and concentration, and visuospatial awareness were significantly affected.

For complex mental tasks, reaction and disengagement times were longer, varying from 5% to 21%, the higher the level of Tesla exposure.

Complex tasks rely on working memory, suggesting that less of this is available to keep the same levels of attention and concentration going at higher levels of exposure, say the authors.

While non-verbal memory did not seem to be affected, there was a fall in verbal memory, although this only reached borderline significance.At the highest level of exposure, volunteers also experienced some physical symptoms, including metallic taste in the mouth (12 people), dizziness (6), headache (5), and nausea (1).

"The exact implications and mechanisms of these subtle acute effects in [practice] remain unclear," write the authors.

But the introduction of increasingly more powerful MRI machines has boosted exposure levels to static electromagnetic fields for both patients and staff, they say.

"To date, mainly health and safety concerns for patients have been evaluated, but possible consequences are particularly important for professionals......cleaners, and MRI engineers since they are repeatedly exposed to static magnetic fields," they add.