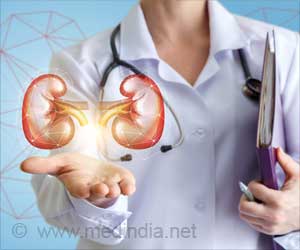 Computational human kidney model could help the researchers or doctors understand how the new drugs are working on the kidney and more importantly if something is seriously affecting the kidney.

The results of this study are published in the PLOS Computational Science.

Advertisement
‘This computational model could simulate the effects of the drug to see if it is bad for the kidney or good and if it is bad, which part of the kidney it is actually affecting can also be found out ’

A University of Waterloo researcher has spearheaded the development of the first computational model of the human kidney.


The new model will allow scientists to gain better insights into how new drugs that target the kidney, such as diabetes medication, may work. It will also enable researchers to better learn about the functions of the kidney, including the how the organ regulates the body's salt, potassium, acid content without having to employ invasive procedure on a patient.
Advertisement
The new development replaces previous models that were based on rodent kidneys.

"While the computational model is not an actual person, it is very inexpensive to run, and presents less of a risk to patients," said Anita Layton, lead author of the study and professor of Applied Mathematics, Pharmacy, and Biology at Waterloo. "Certain drugs are developed to target the kidney while others have unintended effects on the kidney and computer modeling allows us to make long-term projections of potential impacts, which could increase patient safety."

They then adjusted key transporter data so that the predicted urine output is consistent with known human values. Due to the relative sparsity of data on the renal transporter expression levels in humans, they identified a set of compatible transport parameters that yielded model predictions consistent with human urine and lithium clearance data.

"The computational model can be used to figure out things like the cause of kidney failure," said Layton, who is the Canada 150 Research Chair in Mathematical Biology and Medicine. "Your doctor might have a hypothesis that it is this drug that you took or this disease that you have that has caused your kidney to fail.

"The computational model can simulate the effects of the drug to see if it is bad for the kidney, and if so, which part of the kidney it is actually killing."

Source: Eurekalert
Advertisement
<< Only Half Of Venues Listed On Airbnb Have Smoke Detectors: ...
Eyes Can Open a Whole New Window To Understand Mistakes >>

Novel Mini Kidneys Developed From Urine Cells may Open Up New Therapies for Kidney Patients
Tiny models of human kidneys are successfully created from patient-isolated stem cells for the ......

Steroid Use Not to Reduce Risk of Acute Kidney Injury
Steroid use during cardiopulmonary bypass surgery did not reduce the risk of severe kidney injury, ....