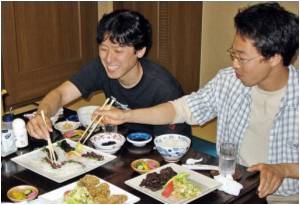 Companies in Japan, Iceland and Norway are developing whale-based products ranging from drugs to cosmetics to animal feed, banking on the resumption of global trade, according to a report.

Ahead of a key meeting of the 88-nation International Whaling Commission (IWC) in Agadir, Morocco next week, debate on the use of hunted whales has centered on the consumption of meat, especially in Japan.

As the International Whaling Commission started its annual meeting in Portugal Monday, a group of bars and restaurants near Tokyo have sought to lure patrons with an exotic new spread of whale dishes.
Advertisement

But the three countries harvesting the marine mammals despite a 1982 global moratorium also exploit whales in other ways and are laying a foundation for future commercial applications, said the report prepared by the Whale and Dolphin Conservation Society (WDCS) and released late Monday.

Gory pictures of whale killing released by Australian government renew calls for ban on whaling, embarrassing Japan.
Advertisement
"It is clear that whalers are planning to use whale oil and other whale derivatives to restore their hunts to long-term profitability," said Sue Fisher, who heads the WDCS's whale campaign.

"Iceland, Japan and Norway are betting heavily that the commercial whaling moratorium will be lifted."

These new applications could ultimately dwarf the value of whale meat, whether sold domestically or exported, she said.

Profit-driven whale hunting has been banned for 25 years, and international trade in whales or whale parts is forbidden under CITES, the Convention on International Trade in Endangered Species.

All three nations however have used loopholes in the moratorium -- which went into effect in 1986 -- to continue tracking and killing the animals.

During that time the IWC has been paralysed, split between pro-conservation and pro-whaling interests.

But a proposal on the table in Agadir could break the stalemate, leading to a compromise deal that all parties can live with, if only barely.

The whaling states would each be granted annual kill quotas through 2020, totalling nearly 12,000 specimens, in return giving up the right to invoke unilateral exemptions, as do Norway and Iceland, or to hunt for "scientific" purposes, as does Japan.

Conservationists would finally see what they regard as rogue nations brought into the IWC fold and the creation of a DNA-based monitoring system, but at the cost of thousands of whale lives.

The 10-year deal is designed to create a pressure-free zone for hammering out a durable agreement.

But anti-whaling groups fear it will legitimate commercial hunting and provide an incentive to push for an overturn of the ban once the decade-long deal expires.

"We anticipate they will use these new pharmaceuticals, animal feed and personal care products to soften global opposition to whaling and challenge the ban on international trade," said Kate O'Connell, a WDCS trade analyst.

Norway, the world's top exporter of fishmeal and oil for livestock and aquatic farming, has conducted research on how to integrate whale products in to the manufacturing process.

Norwegian scientists have also researched the use of whale oil for pharmaceutical and health supplements such as omega-3. And at least one clinical trial is testing its efficacy for treating rheumatoid arthritis.

In Iceland, the government recently recommended the creation of an industrial park in Hvalfiroi where fin whales could be transformed into meat, meal and oil.

The row over whaling in Antarctic hots up as the radical environmentalist group Sea Shepherd vows to ram Japanese vessels involved in such an expedition.
Advertisement
<< World Cup Pandemic Hasn't Breached Pretoria Yet: Fans
Sons Beat Daughters When It's About Swindling Elderly Paren... >>