Community Groups in Vietnam Set Up to Tackle Challenges 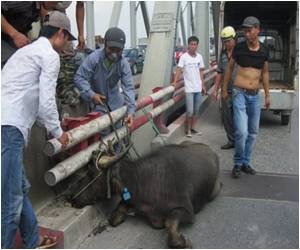 Community groups in rural Vietnam set up to tackle challenges to maternal and neonatal health may reduce the neonatal death rate after three years and increase antenatal care attendance.

The groups are comprised of local health workers, politicians and laywomen (Maternal and Newborn Health Groups). This is according to a study by researchers from Sweden and Vietnam published in this week's PLOS Medicine.

These findings are important as they show that is it feasible to implement community-based activity into the public sector system at low cost.


The researchers, led by Lars-Åke Persson from Uppsala University in Sweden, reached these conclusions by conducting a cluster randomized trial involving 90 local communities (communes) in the Quang Ninh province of northeast of Vietnam between 2008 and 2011. In 44 communes, Maternal and Newborn Health Groups were established (the intervention) by recruiting local health workers, politicians, and women's union representatives to identify and prioritize local perinatal* health problems and implement actions to help overcome these problems.
Advertisement
The authors found that the number of babies dying (neonatal mortality rate) did not reduce over the first two years of the intervention but there was a fall in death rates in the third year to half that observed in the control communesodds ratio 0.51. Women in the intervention communes were also twice as likely to attend antenatal care than women in the control groupodds ratio 2.27.

However, the authors also found that there were no differences between the intervention and control communes in other important outcomes, including tetanus immunization, delivery preparedness, institutional delivery, temperature control at delivery, early initiation of breastfeeding, or home visit of a midwife during the first week after delivery.

The authors conclude: "A randomized facilitation intervention with local stakeholder groups composed of primary care staff and local politicians working for three years with a perinatal problem-solving approach resulted in increased attendance to antenatal care and reduced neonatal mortality after a latent period."

They add: "We have shown that community-based participatory approaches to reduce neonatal mortality is not only effective in South Asian societies but also in a South-East Asian society in rapid transition."

Africa Urged to Look After Maternal Health
African leaders were urged to encourage support for maternal health by Mary Robinson, the ex-Irish ....

Afghanistan: Maternal Health Gains Under Threat
There are four midwives in the Afghan town of Baharak today, which is a massive improvement over ......