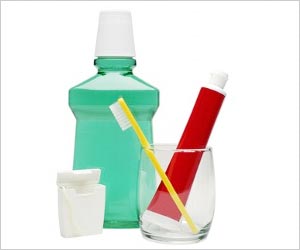 Mouthwash that is readily available in supermarkets and pharmacies can help curb the growth of the bacteria responsible for gonorrhoea, reveals preliminary research published online in the journal Sexually Transmitted Infections.

Daily rinsing and gargling with the product might be a cheap and easy way of helping to control the spread of the infection, suggest the researchers.

The MNC giant Colgate-Palmolive recently tried to obtain patent for their mouthwash formula containing nutmeg 'Myristica Fragrans', which was foiled by India.
Advertisement
‘New cases of gonorrhoea among men are on the rise in many countries amid declining condom use, with the bulk of cases among gay/bisexual men.’

New cases of gonorrhoea among men are on the rise in many countries amid declining condom use, with the bulk of cases among gay/bisexual men, say the researchers.


Rising rates of gonorrhoea heighten the risk of the emergence of antibiotic resistant strains of Neisseria gonnorhoeae, the bacteria responsible for the infection, making the need for a preventive measure that doesn't rely on condoms even more urgent, they say.

For the patients of oral cancer, scientists have developed a herbal mouthwash that can help reduce the degree of pain caused due to radiation therapy.
Advertisement
As far back as 1879, and before the advent of antibiotics, the manufacturer of Listerine, a commercial brand of mouthwash, claimed that it could be used to cure gonorrhoea. But no published research has tested out this claim.

In a bid to rectify this, the researchers assessed whether Listerine could curb the growth of N. gonorrhoeae in laboratory tests and in sexually active gay/bisexual men in a clinical trial.

For the laboratory tests, different dilutions (up to 1:32) of Listerine Cool Mint and Total Care, both of which contain 21.6% alcohol, were applied to cultures of N. gonorrhoeae to see which of any of them might curb growth of the bacteria. By way of a comparison, a salt water (saline) solution was similarly applied to an identical set of cultures.

Listerine at dilutions of up to 1 in 4, applied for 1 minute, significantly reduced the number of N. gonorrhoeae on the culture plates, whereas the saline solution did not.

The clinical trial involved 196 gay/bisexual men who had previously tested positive for gonorrhoea in their mouths/throat, and who were returning for treatment at one sexual health clinic in Melbourne, Australia, between May 2015 and February 2016.

The researchers admit that the monitoring period was short, so the possibility that the effects of the mouthwash might be short-lived can't be ruled out. But the laboratory test results would suggest otherwise, they say.

This research is preliminary, so a larger trial is currently under way to confirm these results and see whether the use of mouthwash could curb the spread of gonorrhoea, they say.

"If daily use of mouthwash was shown to reduce the duration of untreated infection and/or reduce the probability of acquisition of N. gonorrhoeae, then this readily available, condom-less, and low cost intervention may have very significant public health implications in the control of gonorrhoea in [men who have sex with men]," write the researchers.

Mouthwash Overuse may Lead to Cancer

Check Mouthwash Use To Cut Down Heart Attack And Stroke Risk

Use of antiseptic mouthwash increases blood pressure, which leads to increased risk of getting heart attacks and having strokes, claims a new study carried out by Queen Mary University in London.