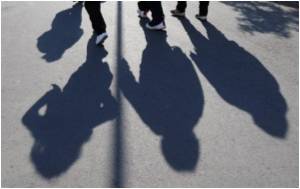 Inspiring feat by Zhu Lindai, a Chinese teenager who used to weigh 152 kilogrammes (335 pounds), has made the number a remote history. Since signing up at a centre in Beijing devoted to helping obese adolescents lose weight she rid practically 50 kilos.

Under the supervision of an instructor, she exercises for two hours every morning and afternoon with an optional extra hour in the evening, following a strict regime of running, pilates, group gymnastics, push-ups and sit-ups.

"I used to stuff myself with hamburgers, crisps, doughnuts and buns. I ate too much," admits the 15-year-old, who withdrew from school to devote herself to a course at the GYD centre in Beijing.


Dedicated slimming centres have sprung up across China over the past decade to take advantage of soaring obesity rates, as newly wealthy young Chinese swap rice bowls for burgers and bicycles for cars.

Obesity is a condition where there is excess accumulation of body fat which poses a risk to the health of the individual. It can affect children and adults.
Advertisement
Around one in five young urban Chinese is now overweight, according to market research firm QF Information Consulting.

Authorities said in September that obesity had become a major public health issue for China's children, and state media reports have said more than 300 million of the country's 1.3 billion people are overweight, 120 million of them obese.

Obesity is a relatively recent problem in China -- a 2009 report by the Chinese Association for Student Nutrition and Health said the number of overweight young people aged between seven and 17 had tripled between 1982 and 2002, a trend that had accelerated in recent years.

The problem has been exacerbated by China's one-child policy, which has resulted in hundreds of millions of only children who are known as "little emperors" because they are often pampered by their parents.

Many Chinese parents are also keen for their children to experience the luxuries they were denied under the country's former leader Mao Zedong.

GYD opened less than two years ago and already, people come from all over China to attend its courses. GYD's main competitor in Beijing, Bodyworks, says it has counted 50,000 clients since it opened in 2002.

"There are two main reasons for childhood obesity: consuming too many calories and a lack of physical activity," says Jia Jianbin, secretary general of the Chinese Nutrition Society.

"For example, the recommended consumption of oil per person is between 25 and 30 grammes (around one ounce) per day. In Beijing, people are eating on average at least 50 grammes a day," he tells AFP.

"At the same time, people are not exercising enough. They drive to work, and at the weekend, they stay home and relax, watch television or surf the Internet."

Sha Zhiyu, who has taken a break from her education in the northern province of Shaanxi to attend GYD, is a classic example.

"Before, I was really into computer games. After meals I would sit for ages in front of my computer and play them. Then when I got tired I'd go to bed," says 17-year-old Sha, who has gone from 139 to 114 kilos during the course.

"I never did any exercise and I just kept putting on weight."

"Some do not feel desirable in their personal relationships, while others are suffering from image problems at work, or believe their appearance will prevent them from getting a job. But the most common concern is health."

At GYD, the fight-back starts with the daily menu.

After a brief pause to digest their dessert-free lunch, the teenagers head back to the gymnasium.

Being physically very active is the mantra to prevent pediatric obesity rather than concentrating efforts at restricting energy consumption.
Advertisement
<< Bone Drugs Might Extend Life Of Replacement Joints
IVF Treatment to Begin for Khloe Kardashian >>

Battle of the Bulge
News Archive
News Resource
Advertisement
News Category
Parents are 'Winging It' on Their Kids' Mobile Use Ankle and Ankle Movements While Riding an Hoverboard Is It Healthy to Let Your Mind Wander? Walk Till it Hurts: Good News for Peripheral Artery Disease Patients Plus Size Models and Social Media: Where Do They Fit In?
More News
Sign up for Wellness Consult a Doctor Sign up for Selfcare