Comedian David Baddiel Fears He Has Been Struck by Dementia 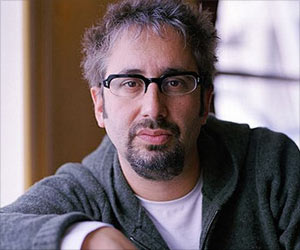 The 51-year-old comedian, David Baddiel has revealed that he fears he is contracting dementia - the condition that is slowly claiming his father.

Baddiel's father Colin suffers from Pick's disease, an extreme form of the degenerative brain condition and he is now convinced he has begun to display the same symptoms. He said: "Almost definitely I've got it. Scientists are making out we're all getting it eventually because we're all going to live longer, and the longer you live the more likely you are to get it.

Dementia has become a very big concern as we have an aging population across the world. Dementia is also terrifying to us because of its disturbing symptoms and limited treatment options.
Advertisement

"You have two choices when faced with the worst things in life: be quiet and suck it up or try your best to make it bearable," he says quietly.


Baddiel, whose mother Sarah died from pneumonia last year, added: "The other day a terrible thing happened. I can't even remember what it was I forgot now, but it was something that really was something I should have remembered, or know. I actually got an anxiety attack thinking about it afterwards. I do genuinely think I've got it."

Vascular dementia is the second most common form of dementia. Though it has no cure, you can still learn to manage its symptoms and lead a joyful life.
Advertisement
Pick's, which accounts for less than 15% of all demen­­tia cases, typically strikes between 40 and 65 and, unlike Alzheimer's, sufferers often experience extreme changes in personality before memory loss.

The condition tends to affect the parts of the brain that are largely responsible for language and the ability to plan and organize, as well as playing an important role in controlling behavior.

Baddiel, who won fame for his Fantasy Football TV show partnership with fellow comic Frank Skinner - together they recorded the anthemic number 1 hit Three Lions for the European Championships in 1996 - has written a new children's book, The Person Controller.

The duo was formed when he asked Skinner to co-present when he was offered the chance to do a program based on the fantasy football craze, called Fantasy Football League.

The authors conducted extensive clinical data to explore the association between HbA1c and the risk of hospitalization for dementia among persons with type 2 diabetes.
Advertisement
<< New 'Avatar' Experiment can Help Paralyzed People Move Arou...
Girl Shaves Head to Raise Money After Dad Dies From Cancer >>

Alterations in Gene Can Prevent Non-Inheritable Parkinson's Disease and Dementia