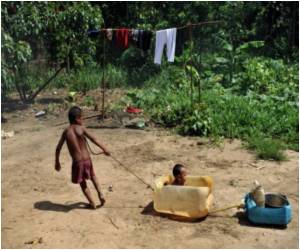 "I am going to ask the government officials in the National Drug Council at their next meeting to suspend glyphosate spraying of illicit cultivations (of coca)," Santos said.

Launched in 1994, the spraying program was long treated as sacrosanct by Colombian officials, who gladly accepted billions of dollars in funding from Washington and succeeded in slashing the cocaine production that has fueled the country's five-decade civil war.


But after the World Health Organization warned in March that glyphosate is "probably carcinogenic," Santos's cabinet called into question whether to continue the air war on coca, the raw ingredient for cocaine.
Advertisement
"The recommendations and studies reviewed by the Ministry of Health show clearly that yes, this risk exists," Santos said.

The president said the order did not mean Colombia would "lower its guard" in the fight against drug trafficking.

Colombia, which along with Peru is the world's leading producer of cocaine, has used glyphosate for years to eradicate illicit coca. Drug officials now have until October 1 to come up with a new plan to tackle illicit coca growing.

The government has mainly used aerial spraying in the south of the country -- a stronghold for the FARC leftist guerrilla group, which authorities accuse of financing itself with drug trafficking.

Colombia Reports 1.8 Lakh Chikungunya Cases, 25 Deaths in Less Than A Year
Chikungunya is a viral disease spread by the bite of infected mosquitoes. More than 180,000 cases .....

Colombian Environmentalist Transforms Used Tires into Eco-Friendly Houses
Houses made from used-tires is a reality around the Colombian capital. This environment-friendly ......