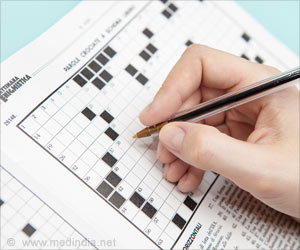 While several previously published studies have suggested a protective effect for cognitive activities such as reading, playing games or attending cultural events, questions have been raised about whether these studies reveal a real cause-and-effect relationship or if the associations could result from unmeasured factors.

To address this question, a Boston-based research team conducted a formal bias analysis and concluded that, while potentially confounding factors might have affected previous studies' results, it is doubtful that such factors totally account for observed associations between cognitive activities and a reduced risk of dementia.

Alzheimer''s disease is a progressive neurodegenerative disease affecting memory and thinking and making the person increasingly dependent on others.
Advertisement
‘Engaging in cognitive activities that is interesting and enjoyable has a sure impact on reducing the risk of developing dementia.’

"Our paper lends support to a potential role for late-in-life cognitive activity in prevention of Alzheimer's disease," says Deborah Blacker MD, ScD, director of the Gerontology Research Unit in the Massachusetts General Hospital Department of Psychiatry and senior author of the report in the September issue of the journal Epidemiology.


"While it is possible that socioeconomic factors such as educational level might contribute to the association between cognitive activity and reduced risk, any bias introduced by such factors is probably not strong enough to fully account for the observed association."

Dementia has become a very big concern as we have an aging population across the world. Dementia is also terrifying to us because of its disturbing symptoms and limited treatment options.
Advertisement
Blacker and her colleagues from Harvard T.H. Chan School of Public Health maintain a database on the Alzheimer's Research Forum website cataloging evidence from observational studies and some clinical trials about known and proposed risk and protective factors for the devastating neurologic disorder.

The research team analyzed 12 peer-reviewed epidemiologic studies that examined the relationship between late-in-life cognitive activities and the incidence of Alzheimer's disease or other forms of dementia. The studies were selected on the basis of prespecified criteria for the AlzRisk database, included almost 14,000 individual participants and consistently showed a benefit, sometimes substantial, for cognitive activity.

Since any observational studies are likely to be confounded by unmeasured factors - such as participants' socioeconomic level or the presence of conditions like depression - the researchers also conducted a bias analysis designed to evaluate how much such factors might influence reported associations between the amount of cognitive activity and dementia risk. This analysis indicated that bias due to unmeasured factors was unlikely to account for all of the association because the impact of such factors is likely to be considerably smaller than the observed effect.

The group also investigated the possible role of reverse causation - whether a reduction in cognitive activity among those already in the long phase of cognitive decline that precedes Alzheimer's dementia might have led to an apparent rather than a real causal relationship. The findings of that analysis could not rule out the possibility that reverse causation contributed substantially to the observed associations, but analyses restricted to studies with longer term follow-up might be better able to address this question, the authors note.

"Ultimately, clinical trials with long-term follow-up are the surest way to definitively address reverse causation," says co-author and AlzRisk co-director Jennifer Weuve, MPH, ScD, of Boston University School of Public Health. "Trials could also confront the vexing question of whether training to improve specific cognitive skills has benefits that extend into everyday functions. But not every question about cognitive activity is well-suited for a trial. To fill those gaps, innovations in epidemiology, such as the analytic techniques used in this study, should help us get even greater insights from available observational data."

Blacker adds, "Cognitive activity looks like it may offer some modest protection, and based on our bias analysis, I am somewhat less skeptical than I was previously. But remember that any impact will be relative, not absolute. I typically advise people to engage in cognitive activities that they find interesting and enjoyable for their own sake. There is no evidence that one kind of activity is better than another, so I would advise against spending money on programs claiming to protect against dementia."

If you feel that the persistent or regular incidences of depression have got nothing to do with what you eat, think again. The reason behind low spirits can be due to insufficient levels vitamin B12.
Advertisement
<< Stem Cells Fail To Launch In Certain Genetic Cases of Microc...
Nurses Help Reduce Crowding in the Emergency Room >>