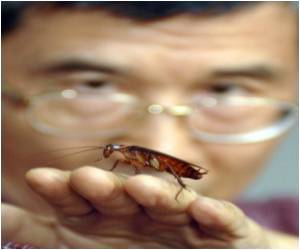 Running cockroaches start to recover from being shoved sideways before their dawdling nervous system kicks in to tell their legs what to do, finds researchers.

In experiments, the roaches were able to maintain their footing mechanically-using their momentum and the spring-like architecture of their legs, rather than neurologically, relying on impulses sent from their central nervous system to their muscles.


"The response time we observed is more than three times longer than you'd expect," Shai Revzen, an assistant professor of electrical engineering and computer science, as well as ecology and evolutionary biology, at the University of Michigan researchers have found.
Advertisement
"What we see is that the animals' nervous system is working at a substantial delay," Revzen said.

"It could potentially act a lot sooner, within about a thirtieth of a second, but instead, it kicks in after about a step and a half or two steps-about a tenth of a second. For some reason, the nervous system is waiting and seeing how it shapes out," he said.

To arrive at their findings, the researchers sent 15 cockroaches (one-by-one, in 41 trials) running across a small bridge onto a placemat-sized cart on wheels.

The cart was attached to an elastic cord that was pulled tight like a loaded slingshot and held in place with a strong magnet on the other side.

Once a roach was about a body length onto the cart, the researchers released the magnet, sending the cart hurling sideways.

The force was equivalent to a sumo wrestler hitting a jogger with a flying tackle, said Revzen, adding that cockroaches are much more stable than humans.

To gather detailed information about the roaches' gait, the researchers utilized a technique Revzen developed several years ago called kinematic phase analysis. It involves using a high-speed camera to constantly measure the position of each of the insects' six feet as well as the ends of its body.

A computer program then merges the continuous data from all these points into an accurate estimate of where the roach is in its gait cycle at all times.

Revzen said the new findings might imply that the biological brain, at least in cockroaches, adjusts the gait only at whole-step intervals rather than at any point in a step.

Periodic, rather than continuous, feedback systems might lead to more stable (not to mention energy-efficient) walking robots-whether they travel on two feet or six.

Robot makers often look to nature for inspiration. As animals move through the world, they have to respond to unexpected disturbances like rocky, uneven ground or damaged limbs.

Revzen and his team believe that patterns in how they move as they adjust could give away how their machinery and neurology work together.

The findings are published online in Biological Cybernetics.

Source: ANI
Advertisement
<< Many Countries Could Gain Long Lasting Benefits By Eliminat...
Teenagers And Adolescents Are Struck by 'Sleep Texting' >>

Cockroaches, a Friend of Humanity Indeed
Biologists say cockroaches have their purpose too. They act as magnets for bacteria and viruses....

Cockroach-Related Asthma in Kids
A combination of pollutant exposure and cockroach exposure results in increasing the chances of ......