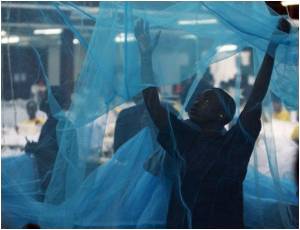 Researchers conducted an independent review of the effects of adding a single dose of primaquine (PQ) to malaria treatment to prevent the transmission of the disease.

The researchers were from the Cochrane Infectious Diseases Group, hosted at LSTM. Mosquitoes become infected with Plasmodium falciparum when they ingest gametocyte-stage parasites from an infected person's blood. PQ is an antimalarial drug that does not cure malaria illness, but is known to kill the gametocyte stage of the P falciparum parasite, thus potentially limiting transmission to further humans. PQ is known to have potentially serious side effects for those who have the glucose-6-phosphate dehydrogenase (G6PD) enzyme deficiency, which is common in many malaria endemic regions.

In 2012 the World Health Organization (WHO) revised its recommendation for a single dose of PQ alongside treatment for P. falciparum malaria from 0.75 mg/kg down to 0.25mg/kg due to concerns about safety. The three authors looked at a total of 18 trials to examine the evidence of benefits and harms of using PQ in this way by evaluating whether PQ will reduce malaria transmission or the potential that it will reduce transmission based on infectious stages (gametocytes) in the blood. This fresh analysis grouped the studies by dose, to evaluate the effects of the low dose currently recommended by the WHO.


None of the included studies tested whether PQ added to malaria treatment reduced the community transmission intensity of malaria. Two studies showed that PQ at doses of 0.75 mg/kg reduced the number of mosquitoes infected after biting humans. PQ does reduce the proportion of people with gametocyte stages, the numbers of gametocytes and the duration of infectiousness (the period that gametocytes are detected in the blood) at doses of 0.4 mg/kg or above, but two trials at lower doses showed no effect.
Advertisement
Patricia Graves, from James Cook University in Cairns, said: "Evidence shows that at PQ doses of 0.4 mg/kg and above there is reduction in infectiousness of individuals. Whether this translates into an effect at community level in reducing transmission is not clear. Given the lack of safety data in those with G6PD deficiency, the data do not reveal whether the revised dosing recommendation will have a positive impact on health."

Host's Scent Manipulated by Malaria Parasite
Chemical odor signal of hosts is altered by malaria parasites, so as to attract mosquitoes and ......

Malaria Patients Smell Irresistible to Mosquitoes
One reason why a person suffering from malaria is bitten again by disease-carrying mosquitoes is ......