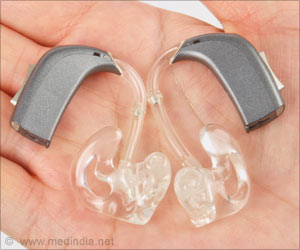 Babies born with hearing loss or impaired hearing should be immediately given cochlear implants, as it has been found that these kids who receive these implants before 12 months tend to learn how to speak early. The results of this study are published in the journal of Otology and Neurotology.

Researchers from Ann & Robert H. Lurie Children's Hospital of Chicago present further evidence that deaf children who received cochlear implants (implanted electronic hearing device) before 12 months of age learn to more rapidly understand spoken language and are more likely to develop spoken language as their exclusive form of communication. In their study, published in Otology and Neurotology, this was true even for children with additional conditions often associated with language delay, such as significantly premature birth. Researchers also showed that implantation surgery and anesthesia were safe in young children, including infants.


"Our results clearly show that kids who received cochlear implants in infancy make progress more rapidly and are more likely to use spoken language as their sole means of communication" says lead author Stephen Hoff, MD, from Lurie Children's, who is also Associate Professor at Northwestern University Feinberg School of Medicine. "More than 90% of deaf children have hearing parents. Most parents hope that a cochlear implant will enable their child to talk. However, early implantation is not a public policy priority. For this reason, many children are not evaluated for cochlear implantation until they are over age 12 months."


‘In the study, it was observed that these kids were so comfortable that they were only speaking as a means of communication.’


Currently, every state has a newborn hearing screening requirement, which has resulted in earlier diagnosis of hearing loss and fitting of hearing aids. However, no public policy promotes early identification of deaf infants whose hearing would be much improved with cochlear implantation in comparison to hearing aids.

"Cochlear implants are remarkable in that they enable children to hear the high pitch consonants such as "s." These are the sounds that hearing aids cannot make audible to deaf children. The sooner children are able to hear through an implant, the more likely they will understand when others talk, and learn to speak clearly," says senior author Nancy Young, MD, Medical Director of Audiology and Cochlear Implant Programs at Lurie Children's and Professor at Northwestern University Feinberg School of Medicine. "Infants should be evaluated to determine if cochlear implantation would provide a superior hearing. The procedure is safe, and the results can be transformative."

In the study, researchers reviewed Lurie Children's experience with 219 children who underwent cochlear implantation before they were three years old, including a group of 39 children who were implanted when younger than 12 months of age. The mean age at last follow-up was 7.5 years. They found that implanted infants developed word understanding ability one year earlier than those implanted as toddlers and were more likely to use spoken language alone to communicate. Children who were implanted after two years of age were much less likely to use spoken language exclusively.

Drs. Young and Hoff are preparing to lead a multicenter clinical trial on the safety and efficacy of implantation of infants and children receiving a MED-El cochlear implant system. The study, expected to open later in 2019, has the potential to expand Food and Drug Administration (FDA) labeling for cochlear implantation to children as young as age seven months of age. At present, all cochlear implant systems have approval for use in children 12 months of age and older, based upon FDA clinical trials done several decades ago. However, many implant programs use these devices off label based on more recent studies indicating the superior outcome. 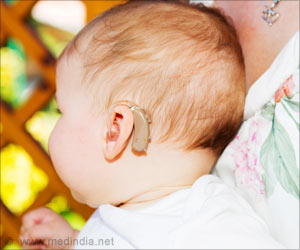 Sign Language Exposure Affects Kids With Cochlear Implants
A cochlear implant allows many people to recognize warning signals, understand other sounds in the environment, and understand speech in person or over the telephone.
READ MORE

People With Cochlear Implants Can Listen to Specialized Music Soon
Cochlear implants are designed to process speech, which is a much simpler auditory signal compared with music.
READ MORE