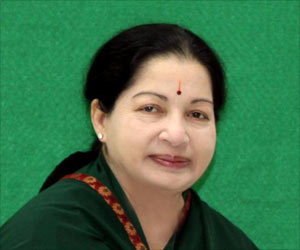 Tamil Nadu Chief Minister J. Jayalalithaa "continues to be under grave situation", but everything is being done to give her the best chance of surviving, said London-based intensivist Dr. Richard Beale.

He said in spite of the progress she had made, her underlying health conditions inevitably meant that the "risk of further problems always remained".

Honorable Chief Minister of Tamil Nadu Jayalalithaa suffered cardiac arrest, who is in a very critical state is on ECMO and other life-support systems.
Advertisement
‘Jayalalithaa, who was undergoing treatment at Apollo Hospitals here, suffered a cardiac arrest and is now on extra-corporal support, which is the most advance support level.’

He further said the Chief Minister is now on extra-corporal support, which is the most advance support level.


"The situation is extremely grave, but I can confirm that everything possible is being done to give her the best chance of surviving this shocking event. She is being cared for by a highly expert multidisciplinary team, and is now on extra-corporal life support. This is the most advanced level of support available, and is the approach the best centres internationally would take in this situation," he said in a statement.

Huge crowd gathered outside Apollo Hospital after the news of Chief Minister J. Jayalalithaa having suffered a cardiac arrest broke on the evening of 4th December.
Advertisement
Jayalalithaa, who was undergoing treatment at Apollo Hospitals here, suffered a cardiac arrest Sunday evening. Meanwhile, the government swung into action, as the Centre's brass got in touch with the state governor C. Vidyasagar Rao and assured complete central assistance.

Union Minister Venkaiah Naidu spoke to the Governor and state Chief Secretary P. Rama Mohana Rao enquiring about her health and will also fly down to Chennai to assess the situation. Also, Union Home Minister Rajnath Singh also spoke to the Governor in regard with the law and order situation in the state given the tense state of affairs regarding Jayalalithaa, and was assured that the situation was under control.

Union Minister Kiren Rijiju also assured Tamil Nadu government that the Centre is always willing to help if they require extra force in regards with maintaining law and order.

This year's theme of World Breastfeeding Week 2015 is `Breastfeeding and Work - Let's Make it Work', aiming to encourage working women to nurse their babies.
Advertisement
<< Chief Minister Jayalalithaa Critical And On ECMO: Reports Ap...
Patients Ineligible for Cancer Studies may Benefit from Tri... >>

Tamil Nadu Chief Minister J. Jayalalithaa has claimed that the government is taking necessary action to prevent an outbreak of dengue in the state.

Accident and Trauma Care Daily Calorie Requirements Drug Side Effects Calculator Drug Interaction Checker Find a Hospital A-Z Drug Brands in India Sanatogen Color Blindness Calculator Selfie Addiction Calculator Noscaphene (Noscapine)
This site uses cookies to deliver our services. By using our site, you acknowledge that you have read and understand our Cookie Policy, Privacy Policy, and our Terms of Use