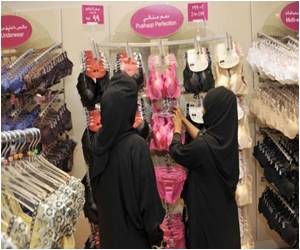 The closure of around 100 lingerie shops was ordered by Saudi Arabian authorities. This closure happens in the wake of the violation of new regulations that ban men from working on their sales staff.

A labour ministry official said all shops in capital Riyadh, which flouted a decree on the 'feminisation and nationalisation of jobs', would be shut down.

A royal decree has enabled Saudi women to shop without embarrassment hereafter. From Thursday, only female staff will be able to sell women's lingerie in Saudi Arabia.
Advertisement

According to local paper, Al-Eqtisadiah, the official said the measure aims to 'provide a safe environment for working women'.


In early 2012, the ministry banned male assistants from working at lingerie shops as a first step to be followed by women-only sales assistants at cosmetics outlets, the Daily Mail reports.

King Abdullah issued the decree to end the 'embarrassment' suffered by women who don't want to give men their measurements.

According to the paper, it was also part of an effort to reduce high female unemployment in the conservative kingdom.

Saudi Arabia's grand mufti has objected to women working in lingerie shops, despite the labour ministry's approval and rising complaints from female customers about male-only staff,
Advertisement
<< Eating Quietly at Your Desk Could Soon Be Replaced By Lunch...
Growing Restrictions on Faith Worldwide Found By Study >>

There has been a drastic increase in the sales of luxury lingerie since last year indicating that recession-hit Britons are looking for pleasure at home this Christmas.

Bra can Help You Shed "10 Pounds in 10 Seconds": Lingerie Expert

The Essence of Yoga Sinopril (2mg) (Lacidipine) Nutam (400mg) (Piracetam) Sanatogen Hearing Loss Calculator Drug Interaction Checker Selfie Addiction Calculator Accident and Trauma Care Drug Side Effects Calculator Vent Forte (Theophylline)
This site uses cookies to deliver our services. By using our site, you acknowledge that you have read and understand our Cookie Policy, Privacy Policy, and our Terms of Use