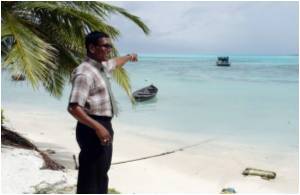 An alarming rate of degradation of the world's rivers and wetlands could be on the cards. It is imperative that all water resources are better managed, stress researchers in a special issue of the international scientific journal Marine & Freshwater Research.

Rainfall runoff and water availability will be increasingly affected in the next four decades, with the tropics probably getting wetter and dry regions becoming drier.

Climate modelling is also predicting increases in the extremes of floods and droughts. As well, increasing temperatures are causing rivers around the world to change their flow patterns, particularly where they rely on snow melting.


Rivers and wetlands are already degrading more than any other ecosystem - with growing impacts on global biodiversity and on human communities that depend on river flows, says UNSW's Professor Richard Kingsford, Director of the Australian Wetlands and Rivers Centre at the University of New South Wales.

World Water Day is celebrated annually on March 22nd in order to focus international attention on the importance of preserving freshwater resources.
Advertisement
"The world is watching how Australia manages the over-allocation of rivers caused by dam-building and increasing effects of climate change," says Professor Kingsford who edited the special issue.

"Australia is the driest inhabited continent. Climate change is likely to increase the challenges we already face concerning the sustainability of our rivers, particularly as a result of building dams and the over-allocation of water resources in the Murray-Darling Basin."

The special issue of Marine & Freshwater Research brings together 10 leading researchers whose papers cover improved management of dams, better conservation planning and the poor record for wetland and river conservation around the world. "We have brought together two of our world's major environmental issues in this special issue - management of over-allocated rivers and climate change," says Professor Kingsford.

Several authors note that climatic changes will have significant implications for ecological and human communities dependent on water. In dry regions, large wetlands will become drier. In coastal regions, rising sea levels will affect coastal lagoons. Decreasing flows as a result of less rainfall and higher temperatures will increase the impacts of salinity and acidification.

"We will increasingly have to think about the way we deal with the shifting goalposts caused by climate change, particularly in the dry parts of Australia, including the Murray-Darling Basin," says Professor Kingsford. "There is a predicted 10 per cent reduction in flows in the rivers of the Murray-Darling and, given the poor state of many wetlands, this is of particular concern."

Other authors suggest ways for improving resilience, including greater environmental flows in rivers, altering dam operations, improved management of conservation areas and ensuring good processes of adaptive management and governance. "We will need to pull all these levers if we are going to chart a future course to sustainability," explains Professor Kingsford.

Increasing environmental flows in regulated rivers remains one of the more important policy and management options for improving the health of rivers and wetlands. Extreme weather events will put pressure on dams, possibly requiring reviews of their safety. In one of the papers in the special issue, Dr Jamie Pittock, a researcher at the Australian National University and a lead author of two papers, argues that there should be a review of the costs and benefits to society and ecosystems of such infrastructure. This is now well established in parts of the world through a time-limited licensing system. "We need to make sure that we are deriving all the benefits of dams over the long term and we should be periodically re-examining our options by thorough cost-benefit analyses" says Dr Pittock. Improved management of environmental flows from dams will significantly help in the long term. This could include raising temperatures closer to natural temperatures  by releasing water closer to the dam surface, using floodplains to reduce the impacts of flooding, and releasing pulsed flows so that they allow different animals and plants to complete their life cycles.

Identification and management of conservation areas (e.g. National Parks) was identified by authors in the special issue as one of the major areas for improvement. "We should be using well established methods for working out where the next wetland acquisitions for our national parks should be and - just as important - we need to focus on effective management including the protection of flows to these areas," said another author Professor Max Finlayson. Most of the National Parks and internationally important wetlands listed under the Ramsar Convention in the Murray-Darling Basin are degrading because governments have not protected flows to these areas.

Finally, the Marine & Freshwater Research special issue identified that governments around the world are failing to sustainably manage rivers and wetlands because the management objectives are often not clear. "Managers need to be more accountable for sustainable management by specifying what it is they are aiming to do and then measuring whether or not they have achieved this," said Kingsford. "Unless communities and their governments start to implement such strategies, then long-term sustainability of rivers and wetlands will just remain an illusion."