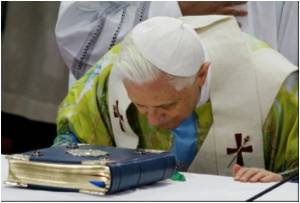 Climate change skeptics had better look at the Vatican response. The venerable Catholic institution is throwing its full weight behind the idea of global warming.

A panel appointed by Vatican's Pontifical Academy of Sciences says it is a moral imperative to effectively address climate change. It has listed numerous examples of glacial decline around the world and the evidence linking that decline to human-caused changes in climate and air pollution.

Recent stats from WHO indicates that 25% of the world's diseases are due to contamination of air, food, water and soil caused by dramatic changes in climate.
Advertisement

The threat to the ways of life of people dependent upon glaciers and snow packs for water supplies compels immediate action to mitigate the effects of climate change, warns the panel's report titled "Fate of Mountain Glaciers in the Anthropocene."


Apparently gone are the days when the Vatican will be outraged if anyone says it is the earth moves round the sun, and not the other way round!

"We are committed to ensuring that all inhabitants of this planet receive their daily bread, fresh air to breathe and clean water to drink as we are aware that, if we want justice and peace, we must protect the habitat that sustains us," the authors write in a declaration prefacing the report. "The believers among us ask God to grant us this wish."

"The widespread loss of snow and ice in the mountain glaciers is one of the most visible changes attributable to global climate change. The disintegration of many small glaciers in the Himalayas is most disturbing to me since this region serves as the water tower of Asia and since both the greenhouse gases and air pollutants like soot and ozone contribute to the melting," said Ramanathan, who has been a member of the Pontifical Academy of Sciences since 2004.

Report authors met at the Vatican from April 2 to April 4, 2011 under the invitation of Chancellor Marcelo Sanchez Sorondo of the pontifical academy. The report will be presented to Pope Benedict XVI.

Though scientists usually refrain from proposing action, Ramanathan said the circumstances warranted advancing suggestions from the working group. The authors recommend pursuit of three measures: immediate reduction of worldwide carbon dioxide emissions, reduction of concentrations of warming air pollutants such as soot, ozone, methane and hydroflurocarbons by up to 50 percent, and preparation to adapt to climate changes that society will not be able to mitigate.

The report title refers to the term coined by Crutzen to describe what is considered a new geologic epoch that began when the impacts of mankind on the planet became a major factor in environmental and climate changes.

"The recent changes observed in glacial behavior are due to a complex mix of caus¬al factors that include greenhouse gas forcing together with large scale emissions of dark soot particles and dust in 'brown clouds', and the associated changes in regional atmospheric energy and moisture content, all of which result in significant warming at higher altitudes, not least in the Himalayas," the authors write.

"Changes of mountain glaciers all around the world are rapid and impacts are expected to be detrimental, particularly in the high mountains of South America and Asia," said Kaser, of the Institute for Meteorology and Geophysics at the University of Innsbruck. "Yet, our understanding about glacier changes in these regions is still limited and ambitious and joint efforts are required to respond to these problems. With its report, the pontifical academy contributes considerably to raising awareness."

"Glaciers are one of our most visible evidences of global climate change," added Thompson. "They integrate many climate variables in the Earth system. Their loss is readily apparent and they have no political agenda. Glaciers remind us of the stunning beauty of nature and in turn the urgency of doing everything in our power to protect it."

The authors conclude: "We appeal to all nations to develop and implement, without delay, effective and fair policies to reduce the causes and impacts of climate change on communities and ecosystems, including mountain glaciers and their watersheds, aware that we all live in the same home. By acting now, in the spirit of common but differentiated responsibility, we accept our duty to one another and to the stewardship of a planet blessed with the gift of life."

Greenland Ice Sheets set new records for melting in 2010, says a new study. The 'exceptional' season stretched up to 50 days longer than the average time.
Advertisement
<< Scientists Find No Evidence of Childhood Leukemia Close to ...
Filipino Children In California Vulnerable To Kawasaki Dise... >>