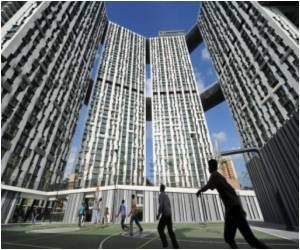 Singapore is the "model compact city", says architect Khoo Peng Beng, and city planners who have to prepare for an ever-growing number in limited areas should learn a lesson from the model city.

Khoo, lead curator of Singapore's pavilion at the Venice architectural Biennale, opens his argument with some startling figures to demonstrate the compactness of the tiny island state off the Malaysian peninsula.

Philanthropy is good way to give back to society by sharing with those who do not have as much.
Advertisement

It is planning for a maximum population of 6.5 million in 20 years, which is 1,000th of the current world total of 6.5 billion.


Yet 1,000 times the land area of Singapore would occupy only 0.5 percent of the total world land mass, equivalent to about twice the size of Italy, Khoo said.

Cities In Asian Are The Most Expensive In The World, Says Survey

A survey has said that Asian cities are among the most expensive in the world for expatriates this year as regional currencies have gained against the US dollar and other key units.
Advertisement
Maps at the exhibit shrink China and the United States to the tiny spaces they would occupy if they had the same density as Singapore, which has a land area of just 710 square kilometres (275 square miles).

The exhibition titled "1,000 Singapores: A Model of a Compact City" stresses the advantages of compactness such as minimising energy consumption, streamlining transportation and reducing the carbon footprint.

"Architecture, social systems, transport systems, waste management and so on are working hand in hand in a meta-project," Khoo told AFP, describing Singapore's evolution as a "very slow process of self-invention, as an island, a country, a city."

One of the world's richest cities and widely acclaimed as among the most "liveable", Singapore has avoided the congested feeling of places like Hong Kong and Tokyo until recent years.

Increasing numbers of immigrants and guest workers jostle for space with the locals, and tourism is surging thanks to two new massive casino resorts that opened a few months ago.

Car ownership has also spiked even though Singapore is one of the costliest places in the world to own a vehicle.

And flash floods that wreaked havoc in June and July raised questions over whether the nation was equipped to handle the side effects of rapid urbanisation.

Back in Venice, Khoo said: "There is a heroic quality in thinking about the environment in that architecture can save the world, save the people, save the country."

He said Singaore wanted to "invite people to reflect on how human settlement can be," adding: "We do not have to continue to occupy a lot of land."

Fifty-three countries have pavilions at this year's Biennale, which opens Sunday and runs until November 21.

A master plan on how major cities must respond if they are to continue to grow in the face of climate change has been outlined in a three-year project led by Newcastle University.
Advertisement
<< Infant Undergoes Rare Hernia Surgery
Non-Prescription drugs Pose Health Risks to Children >>

Poor Air Quality in Megacities Cause Immense Harm to Residents

Using a novel scientific model,researchers have delved into an understanding of how poor air quality is in megacities and their impact on health of the residents as well as on the environment.
Advertisement
News A-Z
A B C D E F G H I J K L M N O P Q R S T U V W X Y Z
What's New on Medindia