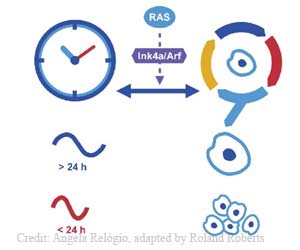 Circadian clock or biological clock in the body cycles daily and synchronizes with solar time was found to suppress cancer, reveals a new study.

The study published in the open access journal PLOS Biology by Dr Angela Relógio from the Charité-Medical University of Berlin, Germany and colleagues, hypothesised that given the range of molecular time-dependent processes that it regulates, including metabolism, DNA repair and the cell cycle, the circadian clock has the potential to act as a tumour suppressor.

The circadian clock runs in sync with environmental light-dark cycles and helps to orchestrate metabolic and behavioural patterns such as daily cycles of rest and activity. Many diseases including cancer can disrupt the clock, causing it to run amok.


When cells in our body multiply, however, they follow a different schedule known as the cell cycle, in which two daughter cells are produced by cell division at the end of the cycle. Many cancers involve a dysfunctional or hyperactive cell cycle, which enables the tumor cells to multiply uncontrollably.
Advertisement
The research team found that when they perturbed a protein called RAS, which is inappropriately activated in about a quarter of all human tumors, and two proteins called INK4a and ARF, which can suppress cancer, they discovered a cross-talk between the circadian clock and the cell cycle.

Relógio, whose surname in Portuguese means "clock," says: "Based on our results, it seems to us that the clock is likely to act as a tumour suppressor, and that it is of advantage for cancer cells to circumvent circadian control. One cannot stop wondering whether disrupted circadian timing should be included as a next potential hallmark of cancer."

The findings of Relógio and colleagues reveal that a new layer of complexity - internal time -may be relevant for cancer treatment, and chime with recent studies that propose the use of chronotherapy, in which sleeping and waking times are adjusted in an attempt to reset the patient's biological clock.

In the light of the new findings here described and the chronotherapy studies published so far, we might need to rethink cancer treatment, by including the internal time factor, to achieve optimal therapeutic effects.

Source: Eurekalert
Advertisement
<< Kids With Before Bed Screen Time habits may Sleep Less
Many Discarded Kidneys Can be Used for Transplantation >>

Circadian Clock Within Kidneys Regulates Metabolic Process
The clock is responsible for the temporal adaptation of kidney function to the light and dark ......

Gene Involved in Neurodegeneration Linked to the Circadian Clock
A gene involved in neurodegenerative disease plays an important role in the function of the ......

Gene Behind the Circadian Clock
A gene involved in neurodegenerative disease also plays a critical role in the proper function of .....