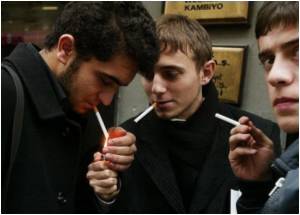 A new study has concluded that tobacco smoking can affect teenagers' brains.

While studies have linked cigarette smoking to deficits in attention and memory in adults, UCLA researchers wanted to compare brain function in adolescent smokers and non-smokers, with a focus on the prefrontal cortex, the area of the brain that guides "executive functions" like decision-making and that is still developing structurally and functionally in adolescents.

They found a disturbing correlation: The greater a teen's addiction to nicotine, the less active the prefrontal cortex was, suggesting that smoking can affect brain function.


The finding is obviously not good news for smokers, said the study's senior author, Edythe London, a professor of psychiatry at the Semel Institute for Neuroscience and Human Behavior at UCLA.

Tired of people asking you to stop smoking around them? Don't want to be ordered around by public smoking bans? Simple steps that help you to quit smoking.
Advertisement
"As the prefrontal cortex continues to develop during the critical period of adolescence, smoking may influence the trajectory of brain development and affect the function of the prefrontal cortex," London said.

In the study, 25 smokers and 25 non-smokers between the ages of 15 to 21 were asked to perform a test that activated the prefrontal cortex and required them to inhibit responding.

The test, called the Stop-Signal Task (SST), was done while the participants were undergoing functional magnetic resonance imaging (fMRI). The Stop-Signal Task involves pressing a button as quickly as possible every time a lighted arrow appears - unless an auditory tone is played, in which case the participant must prevent himself from pressing the button. It is a test of a person's ability to inhibit an action.

Prior to the fMRI test, the researchers used the Heaviness of Smoking Index (HSI) to measure the level of nicotine dependence in the smoking group. The HSI takes into account how many cigarettes a teen smokes in a day and how soon after waking he or she takes the first smoke.

The results of the tests, London said, were interesting - and surprising. Among smokers, the researchers found that the higher the HSI - that is, the more a teen smoked - the lesser the activity in the prefrontal cortex. And yet, despite these lower levels of activation, the smoking group and the non-smoking group performed roughly the same with respect to inhibition on the Stop-Signal Task.

"The finding that there was little difference on the Stop-Signal Task between smokers and non-smokers was a surprise," said London, who is also a professor of molecular and medical pharmacology at the David Geffen School of Medicine at UCLA and a member of the UCLA Brain Research Institute.

"That suggested to us that the motor response of smokers may be maintained through some kind of compensation from other brain areas."

Protracted development of the prefrontal cortex has been implicated as a cause of poor decision-making in teens, London said, caused by immature cognitive control during adolescence.

"Such an effect can influence the ability of youth to make rational decisions regarding their well-being, and that includes the decision to stop smoking," she said.

On the other hand, the fact that adolescent smokers and non-smokers performed equally well during a response-inhibition test suggests that early interventions during the teen years may prevent the transition from a teen smoking an occasional cigarette in response to peer pressure to addiction in later adolescence.

The research appears in the current online edition of the journal Neuropsychopharmacology.