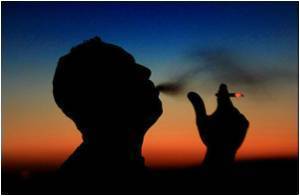 A new study says that cigarette smoke causes a key enzyme that regulates the body's response to inflammation, to shut off.

Researchers at University of Alabama at Birmingham found that smoke causes the enzyme to shut down white blood cells following a successful response to inflammation.

The study also found a previously unknown substrate of the enzyme, which recruits white blood cells that attack the cause of the inflammation.


"We found, however, that cigarette smoke inhibited LTA4H, preventing it from shutting down PGP," said J. Edwin Blalock.

Encyclopedia section of medindia briefs you about the History of Tobacco
Advertisement
The study also details a dual role played by the enzyme; when contained within a cell, it has a pro-inflammatory job.

However, when the enzyme is found outside of the cell (when the cell it resides in dies, for example) its role switches to an anti-inflammatory one.

"This dual role could have important ramifications for the design of new anti-inflammatory drugs that target LTA4H," said Blalock.

The findings are published online today at Science Express.

Healthy foods as part of anti-inflammatory diet to fight inflammation are basic components of the ...

Inflammation is the response of living tissue to injury due to a variety of causes that call upon host ...