Cigarette, Alcohol Use Down Among US Teens 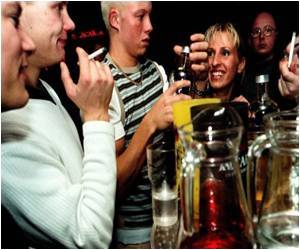 US teenagers cigarette and alcohol use falls since the mid-1970s, but the use of marijuana remains steady, shows survey.

Some 18.7 percent of grade 12 high school students, typically aged 17 or 18, reported smoking cigarettes in the latest Monitoring the Future, well down from a peak of 36.5 percent in 1997.

Among eighth-grade pupils, the proportion of smokers was 6.1 percent, down from 21 percent in 1996, the classroom survey of 46,773 students from 400 schools indicated.


"That cigarette use has declined to historically low rates is welcome news, given our concerns that declines have slowed or stalled in recent years," said Nora Volkow of the National Institute on Drug Abuse, which funded the survey.
Advertisement
Some 63.5 percent of 12th graders and 26.9 percent of eighth graders consumed alcohol in the past year, down from peaks of 74.8 percent in 1997 and 46.8 percent in 1994 respectively.

Binge drinking, defined as five or more drinks in a row in the fortnight prior to taking the survey, saw a five-year decrease, reported by 6.4 percent of eighth graders, 14.7 percent of 10th graders and 21.6 percent of 12th graders.

On the other hand, use of marijuana "remains steady" after some increases in recent years, with 36.4 percent of 12th graders having used it once in the past year, and 6.6 percent on a daily basis.

Some 11.4 percent of 12th graders said they had used synthetic marijuana, known as K2 or spice.

Launched in 1975, Monitoring the Future is among three major surveys sponsored by federal health officials to take stock of substance abuse among American teenagers.