Church Tax to be Paid by Roman Catholics 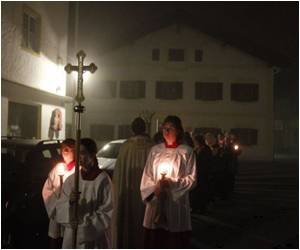 In order to remain a member of the Church and participate in its rites, a top German court ruled on Wednesday that Roman Catholics must pay their church tax.

The Federal Administrative Court's ruling came two days after a decree by the German bishops' conference took effect, barring Catholics from receiving the sacraments or becoming a godparent if they refuse to pay the levy.

Only a fraction of the perpetrators faced prison and little has been done to punish those who covered up the crimes, though the pedophile priest crisis has cost the US Roman Catholic church
Advertisement

The bishops said the new restrictions were aimed at countering dwindling church congregations in Germany but a progressive Catholic group has criticised it as a system of "pay and pray".


The court in the eastern city of Leipzig ruled against canonist Hartmut Zapp from Freiburg, who in 2007 declared at his local civil register office that he would no longer pay the church tax but remained a member of the Catholic denomination.

In Brazil, catholic numbers are strongly declined among all classes, shows study.
Advertisement
That prompted the archbishopric to lodge a complaint against him and the case has been back and forth through several courts.

Partially leaving the Church is not possible, the Leipzig judges decided, saying anyone wishing to be part of the Catholic denomination could not call on the state to limit the Church's right of self-determination.

Germany has had a system in place since the 19th century of having citizens to either officially declare their religion and pay a church tax, or to be classed as "non-religious".

A change in status from being a member of a religion requires a formal procedure to "leave the Church", as an increasing number of Germans have done, mostly from the Catholic Church but also from the Protestant faith.

The levy amounts to between eight and nine percent of income tax.

Last year, 126,488 Catholics turned their back on the Church in Germany which counted more than 34 million Catholics among its nearly 82 million inhabitants.

German Catholic Church Decrees No Sacraments If Tax Is Not Payed