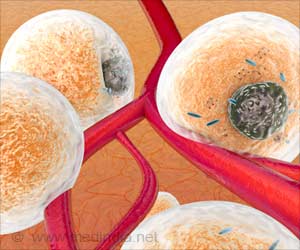 One of the main mechanisms behind the repair of serious damage to the human DNA discovered by University of Copenhagen researchers. A 'scanner' inside the cells decides whether or not so-called flawless DNA repair, which protects against cancer, is launched.

Damage to the human DNA can cause unstable genetic material and thus plays a main role in the development of cancer. Therefore, a lot of researchers are trying to learn from the cells' own protection against DNA mutations. Among other things, this is done by quickly and correctly repairing DNA damage and thus avoiding tumour development.
Advertisement
‘The protein that acts like a scanner is called BARD1, and the researchers have known for a long time that it works like a so-called tumour suppressor.’

Now researchers from the University of Copenhagen have come a step closer to understanding the cells' repair process in a new study published in the scientific journal Nature Cell Biology. For these serious damages, there are two basic repair systems, but only one of them is flawless. If this system is out of function, there is increased risk of developing cancer following from the DNA damage to which our cells are constantly exposed. We know from mutations in so-called BRCA genes that this causes hereditary breast and ovarian cancer.


'We have discovered how the cell launches the flawless system for serious DNA damage repair and thus protects against cancer. This is done using a protein you could call a 'scanner', which scans the histones in the cell and on that basis launches the repair process', says the researcher behind the study, Professor Anja Groth from the Biotech Research & Innovation Centre.
Advertisement
3D-Printed Copy Rather than Crude Gluing

According to the researchers, the problem with the two repair systems is that one is much easier and faster for the cell to launch than the other, and therefore the former is used more often. However, it does not work as well as the latter. Here the two cut DNA strings are merely glued back together.

'You can imagine that the one repair system somewhat awkwardly tries to glue two DNA strings together, while the other system produces a 3D-printed copy resembling the DNA before damage completely. The first system produces far more errors than the latter, and therefore the latter provides far better protection against tumour development', Anja Groth explains.

However, this is the first discovery of BARD1's scanning function, which tells the BRCA1 protein and thus the cell that a flawless repair system can be launched. If possible, it then launches the BRCA1 function that plays such a vital role in cancer protection.

Understanding the Repair Process Is Significant to the Development of Medicine

The flawless repair method is also referred to as a homologous recombination. For part of its lifetime the cell contains two identical DNA strings, as it is getting ready to split. This means that the cell actually holds the solution to its own damage.

In connection with this and other discoveries the researchers have founded the company Ankrin Therapeutics, which seeks to utilise DNA repair mechanisms to develop new targeted cancer treatment.

Source: Eurekalert
Advertisement
<< Patients and Activists Demand End to Malpractices by Private...
Opt for Oil Massage to Rejuvenate Your Body >>