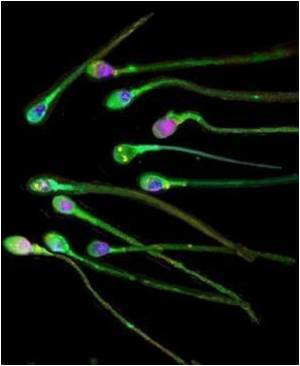 A woman's body may be unconsciously selective about sperm, allowing some men's to progress to pregnancy but killing off the chances of less suitable matches, an Australian researcher said Wednesday.

University of Adelaide professor Sarah Robertson said her research suggested that sperm contains "signalling molecules" that activate immunity changes in a woman so her body accepts it.

But some apparently healthy sperm failed to activate these changes, leading to the suggestion that the female system can be "choosy" about its biological mate, she said.

"The male provides information that increases the chances of conception and progression to pregnancy, but the female body has a quality control system which needs convincing that his sperm is compatible.

Interactive section of Medindia explains the journey of the sperm from testis to the outside world.
Advertisement
"That's where the dance can go wrong with some couples -- if the male signals are not strong enough, or if the female system is too 'choosy'."

Robertson said sperm was more likely to fail if the woman had not previously been exposed to that man's semen for at least three months.

"We used to think that if a couple couldn't get pregnant, and the man's semen test was normal, the problem lay with the woman. But it appears this is not always the case," Robertson said.

The researchers plan to continue their work, which they hope will lead to improved treatments for infertility and miscarriages.

Artificial Insemination is a medical procedure usually used to treat infertility. In this procedure, sperm is placed into a female''s vagina, uterus or fallopian tubes by artificial means.
Advertisement