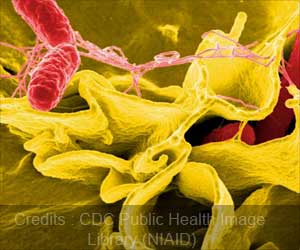 The concentration of HDL cholesterol also called "good" cholesterol seems to matter with respect to getting infectious diseases, such as gastroenteritis or pneumonia, according to a new study. Most people recognize that there is a relationship between cholesterol levels and risk of heart disease. But the new study from Copenhagen University Hospital and University of Copenhagen shows that a certain kind of cholesterol might affect our health differently, that is, through a role in the immune system.

"Surprisingly, we found that individuals with both low and high HDL cholesterol had high risk of hospitalization with an infectious disease. Perhaps more importantly, these same groups of individuals had high risk of dying from infectious disease," explains professor and chief physician at University of Copenhagen and Copenhagen University Hospital Børge Nordestgaard.

Advertisement
‘Individuals with both low and high HDL cholesterol have high risk of hospitalization with an infectious disease.’

The results were based on data from 100,000 individuals from the Copenhagen General Population Study who were followed for more than 6 years using national Danish health registries, and have just been published in the highest ranking journal within cardiovascular disease -- European Heart Journal.


Possible role in the immune system

"Numerous studies in animals and cells indicate that HDL is of importance for the function of the immune system and thereby the susceptibility to infectious disease, but this study is the first to examine if HDL is associated with the risk of infectious disease among individuals from the general population," explains one of the authors PhD-student and physician Christian Medom Madsen from University of Copenhagen and Copenhagen University Hospital.
Advertisement
The authors cannot based on this study conclude that very low or very high HDL is the direct cause of the increased risk of infectious disease, but conversely they cannot rule out a direct causal relationship either, as data from the genetic part of the study indicates that this might be the case.

"Our findings indicate that, in the future, research into the role and function of HDL should not narrowly focus on cardiovascular disease, but rather focus on the role of HDL in other disease areas, such as infectious disease," says Børge Nordestgaard.

Individuals with very low HDL cholesterol had a 75% higher risk of infectious disease as compared to the reference group and the risk was 43% higher in those with very high HDL cholesterol.