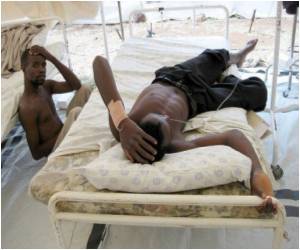 Cameroon in West Africa is seeing an outbreak of cholera that has infected 3,000 people and has claimed 150 casualties already.

Plan International, a charity organization, has warned that many more hundreds would die daily, if aid did not come soon to prevent the spread of the epidemic. Mfoundi, the worst affected district, has reported 500 new cases and 46 deaths in one week, and the capital Yaounde has more than 1,500 sick people.

Baro Famari, the country's director for Plan International, said government aid is vital to prevent the outbreak from spreading rapidly. Infected people who are crossing the countries' borders are spreading the disease.


Cholera is spread through water infected with human waste and can kill within six hours. Children under four are most at risk. If left untreated, mortality rates can be up to 60%. Haiti and Cameroon too had suffered from an epidemic outbreak of this waterborne disease. A lack of public toilets, limited access to clean water, and general ignorance of hygiene and spread of disease keeps these epidemics recurring often.

Waterborne diseases are communicable diseases caused by diseases causing microorganisms in contaminated water. It is more prevalent during floods and in tsunami affected areas.
Advertisement
It has been forecast that it will take four to six months to bring it under control. Before then, it would have expanded its areas of infection.

Plan International is spending £120,000 disinfecting latrines and water pumps, providing medical aid and building awareness. Aid workers from UNICEF and the World Health Organisation are helping out too.

Rapid urbanization with an uncontrolled population growth has interfered with global efforts to provide access to clean, drinking water, states a UN report at a conference in Stockholm.
Advertisement
<< Some Risks of Calcium Supplements
Obesity No Deterrent to High Risk Behaviour >>