Cholera Could Affect 800,000 Haitians This Year: US Study 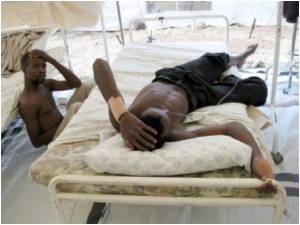 Up to 800,000 Haitians will contract cholera this year, double the estimates of UN agencies, a report published by The Lancet on Wednesday claimed.

A US team led by Jason Andrews from Harvard School of Public Health also found that a recent dip in reported cases was likely a temporary phase of the epidemic and not related to the intervention efforts.

"Although worldwide estimates of the epidemic at present are based on the assumption that the epidemic will attack four percent of the population, this assumption is essentially a guess," the report said.


Previous estimates were "based on no data" and ignored "the dynamics of cholera epidemics, such as where people acquire the infection, how they gain immunity, and the role of human interventions such as water allocation or vaccination," it added.

Interactive section of Medindia gives details regarding waterborne disease
Advertisement
The findings, published in the medical journal's online edition, suggested that a combination of access to clean water, oral vaccination and increased antibiotic use could save thousands of lives.

Researchers developed a number of mathematical models to predict the different outcomes when the three key variables were altered.

But if the three variables were applied, the models predicted 170,000 fewer cases and 3,400 fewer deaths.

"I hope that cholera will be under control in Haiti within a year," David Sack from John Hopkins Bloomberg School of Public Health said.

But he added: "The more realistic expectation is for endemic cholera to continue for many years..."

To prevent that, specialists needed to improve water and sanitation, case management with appropriate antibiotics, and the use of oral vaccines, he said.

More than five months after the disease broke out in Haiti's Artibonite valley, the death toll from the cholera epidemic has reached 4,672, the health ministry said last week.