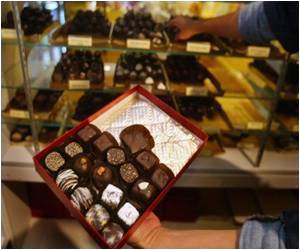 Cocoa compounds help reduce blood pressure, states review in The Cochrane Library. The researchers reviewed evidence from short-term trials in which participants were given dark chocolate or cocoa powder daily and found that their blood pressure dropped slightly compared to a control group.

Cocoa contains compounds called flavanols, thought to be responsible for the formation of nitric oxide in the body. Nitric oxide causes blood vessel walls to relax and open wider, thereby reducing blood pressure. The link between cocoa and blood pressure stems from the discovery that the indigenous people of San Blas Island in Central American, who drink flavanol-rich cocoa drinks every day, have normal blood pressure regardless of age. However, flavanol concentrations in cocoa and chocolate products vary according to cocoa processing procedures and types of chocolate, so it is difficult to establish the optimal dosage for an effect.

Blood pressure is the pressure of the blood flowing through your blood vessels against the vessel walls. Just by entering you age, you can get the accurate range of blood pressure value.
Advertisement

To investigate the effect of flavanols on blood pressure, the researchers reviewed data from trials in which people consumed dark chocolate or cocoa powder containing between 30-1080 mg of flavanols in 3-100 g of chocolate each day. Altogether, 856 people were involved in 20 trials lasting 2-8 weeks, or in one case, 18 weeks. Flavanol-rich chocolate or cocoa powder reduced blood pressure on average by 2-3 mm Hg.


"Although we don't yet have evidence for any sustained decrease in blood pressure, the small reduction we saw over the short term might complement other treatment options and might contribute to reducing the risk of cardiovascular disease," said lead researcher Karin Ried of the National Institute of Integrative Medicine in Melbourne, Australia, who worked with colleagues at the University of Adelaide.

In a recent study it was found that cocoa flavanols can improve mild cognitive impairment.
Advertisement
In a subset of trials, when chocolate or cocoa powder was compared to flavanol-free-products as controls, the beneficial effects were more pronounced (3-4 mm Hg), whereas the researchers found no significant effect on blood pressure in the second subset with low-flavanol products as control. It is possible that low-flavanol products also have a small effect on blood pressure, so that it was harder to observe differences between high and low-flavanol products in these trials. However, results of these subsets of trials may have been influenced by trial length and blinding of participants, as trials using flavanol-free control products tended to be of shorter duration with participants knowing their allocated group.

"We'll also need to see long term trials, including effects on the risk of stroke and cardiovascular disease, before we can come to conclusions regarding clinical outcomes and potential side effects of long-term consumption," said Ried. "These trials should use flavanol-free products in the control groups to eliminate any potential effects of low-dose flavanol on blood pressure."