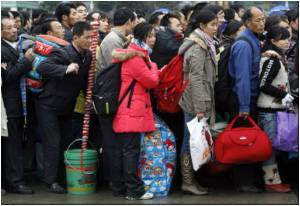 Chinese students, struggling for jobs with other potential candidates, are now turning to taking plastic surgery as an added advantage.

Chinese employers can be frank about their preference for attractive job candidates -- sometimes even posting height requirements in recruitment adverts.

With a record seven million graduates entering the job market this year, combined with a growth slowdown, China's state-run media dubbed 2013 the "toughest ever year" for would-be white-collar employees.


Now surgeons across the country say that increasing numbers of students are going under the knife in the hope of boosting their prospects, expanding a cosmetic surgery market that is already the third-largest in the world.
Advertisement
Dozens of plastic surgery clinics have plastered advertisements across the southwestern city of Chongqing, with posters promoting surgeon Wang Xuming's "Eiffel Tower" procedure showing the shape of a well-sculpted nose next to the French landmark's gentle curve.

"We've been influenced by the beauty of the Eiffel Tower, we don't just add to the nose, but rebuild it," said Wang, adding he performs around a dozen such operations each month.

"It's helped them a lot"

A Chinese government-backed drive to expand the country's university system has seen its ranks of universities and colleges more than double in the past decade, according to official statistics.

But a shortage of white-collar jobs means that hundreds of thousands of graduates end up unemployed every year. About 10 percent of recent university graduates are unemployed, more than double China's official unemployment rate for the general population, according to a June survey by MyCOS, a Beijing based education consultancy.

"Some students face a lot of employment pressure after graduation, if their facial features are good, they'll have more chance of finding a job," said Wang.

"We've had students getting the Eiffel nose, it's helped them a lot."

China stands behind only the US and Brazil for the number of plastic surgery operations performed each year, according to the International Society of Aesthetic Plastic Surgeons.

Xu Yang, 26, who is on a museum studies course in Beijing, said she underwent liposuction this year partly to help her find a job.

"I was fat, and after surgery, finding a job can be easier," she said. "Employers sometimes care more about your appearance than your experience, especially for white-collar jobs."

At the Chongqing hospital, Wang washed his hands before operating on a patient he identified as a 33-year-old ballet dancer.

After putting her under anaesthetic, he cut a piece of tissue from the patient's forehead before reinserting it into her nose to make it bigger.

The clinic's customers are almost exclusively female and their families often foot the bill, said a hospital manager who gave her surname as Li.

"They usually come in with their mothers, and tend to be from well-off backgrounds," she said.

"The Eiffel is a classic building, full of aesthetic design, we try to combine medicine and art," she explained. "We hope the noses will turn out as classics, taking on the feeling of the Eiffel Tower."

Even so, the marketing opportunity is too good to miss -- and Li said a select few who undergo the procedure will win an expenses-paid trip to Paris to stand under the city emblem along with their new nose.

Obesity and Anemia Lead to Hospital Readmissions in Plastic Surgery Patients
A new study says that obesity and postoperative complications are independent risk factors for ......