Chinese Set to Overtake English as Most Popular Language on Internet 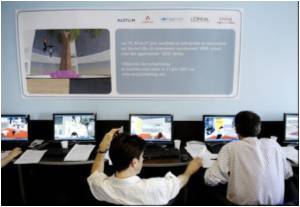 English is currently the most popular language on the Internet, but its era of supremacy seems to be coming to an end.

An infographic, published by The Next Web using info from Internet World Stats, shows the growing prominence of Chinese users on the web, and predicts that Chinese will overtake English as the most popular online language in the next five years, reports Discovery News.

English words and phrases will soon become extinct in Chinese newspapers, books and websites, because the country's publishing body states, the purity of the Chinese language is endangered.
Advertisement


English is currently the dominant Internet language with 537 million users using English as their primary language while 444 million speak Chinese.

'Microblog' and 'WikiLeaks', according to a Chinese Wikipedia-style website, topped the search terms used on the Internet in China this year.
Advertisement
But while the Internet penetration among English speakers is 42 percent, 42 percent of people who speak Chinese have access to the Internet, meaning Chinese has a greater potential to expand than the English language.

China has several policies in place to support the growth of the Chinese language.

The General Administration of Press and Publication website recently announced that the mixing of foreign words in Chinese language publications without an accompanying Chinese language translation has been banned.

This includes many uses of common English sayings, abbreviations and phrases that have become popular in Chinese language publications in recent years.

Experts have said that it is impossible to realize the plan made by the British government to block Internet pornography at source.
Advertisement
Advertisement