Chinese Opt For Imported Milk Powder Due To Safety Concerns 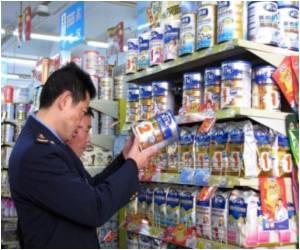 Nearly seventy percent Chinese people preferred imported milk powder and had little confidence in domestic brands because of food safety concerns, even though the latest official test report said there is "no significant difference" between domestic dairy products and their overseas rivals.

Li Tong, a salesperson from a Beijing-based dairy store, told CCTV that overseas products make up more than 70 percent of their sales, leaving the domestics brands as the remaining portion.


And that's not the case only in Beijing. Consumers in other Chinese cities also expressed a lack of trust in domestic milk powder, the China Daily reports.

Encyclopedia section of medindia gives a general info about Welcome to the world of milk
Advertisement
Wu Peiyuan, a 27-year-old resident from Tianjin municipality, told China Daily on Monday that he would only consider giving his 3-month-old son infant formula that was produced overseas.

"We have been watching the reports that say domestic dairy products have safety issues, such as containing melamine-tainted powder, almost every day," Wu said, adding that his neighbor persuaded him to choose overseas brands.

"Why should I risk harming my baby?" I spent around 500 yuan ($75) each month on Mead Johnson's products. Those imported products cost me 350 yuan more than domestic brands every month, but I have no other choice," he said.

A consumer in Beijing, who wanted to be anonymous, said she spent more than 2,000 yuan a month on imported infant formula purchased in Hong Kong, adding that she would only trust imported formula.

Indian Medical Journals Find a Hospital Color Blindness Calculator Accident and Trauma Care Nutam (400mg) (Piracetam) The Essence of Yoga Turmeric Powder - Health Benefits, Uses & Side Effects Drug - Food Interactions A-Z Drug Brands in India Blood Donation - Recipients
This site uses cookies to deliver our services. By using our site, you acknowledge that you have read and understand our Cookie Policy, Privacy Policy, and our Terms of Use