Chinese Kids Consuming Too Much Aluminum From Food Additives 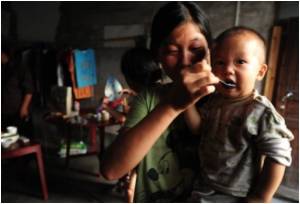 Over 30 percent of Chinese kids between the ages of 4-6 are consuming too much of aluminum from food additives, finds a new study.

About 43 percent of this age group eat 1.6 times the maximum daily consumption of aluminum suggested by the World Health Organization, according to a survey conducted by the China National Center for Food Safety Risk Assessment under the Ministry of Health.

Children absorbed the hazardous substance mainly by eating puffed-grain foods, according to the study results, released on Thursday. Exposure to high levels of aluminum may result in respiratory and neurological problems.

Processed or convenience foods require less time and energy for food preparation. Most of the processed foods are healthy with nutritional values.
Advertisement
Such additives are allowed in food processing, but producers tend to use more than the required amount to boost taste, Chen added.

The survey also showed that people living in northern China consume 4.6 times the amount of aluminum taken in by people in southern China, due to the former's dietary preference for flour products.

The country's health authorities are considering stricter regulations on the use of 13 kinds of food additives containing aluminum, according to Chen.

Consuming foods that have been contaminated with pathogens such as E.coli, Salmonella or Campylobacter, can cause food poisoning.
Advertisement
<< Pak Transgenders Have Equal Rights as All Other Citizens: ...
True Costs of Caring For Cancer Patients in Europe Revealed >>

As there is no evidence for the effectiveness of IgG blood tests, researchers wanted to study the link between diet and behavior among children with ADHD.
Advertisement
News A-Z
A B C D E F G H I J K L M N O P Q R S T U V W X Y Z
What's New on Medindia

Why Do We Eat - Nutrition Facts
News Archive
News Resource
Advertisement
News Category
JUUL E-Cigarettes Banned from US Market Busy Americans Get The Least Sleep At 40 Years Deepika Padukone Rushed To Hospital After Sudden Chest Pain Vegans, Vegetarians and Fish Eaters Have Better Memory Than Meat Eaters How to Reduce the Risk of Acute Kidney Injury By Drinking Coffee?
More News
Sign up for Wellness Consult a Doctor Sign up for Selfcare