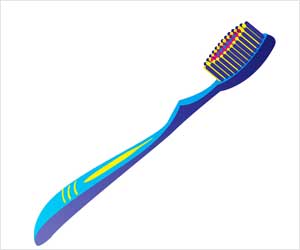 Chinese man had swallowed a 14-centimeter long toothbrush 20 years ago in an attempt to commit suicide. The Chinese doctors removed it from the man's entrails.

Li, the 51-year-old man, was admitted to the No.3 People's Hospital of Shenzhen in Guangdong province with abdominal pain in late June. When the CT Scan revealed a strange item in his stomach, Li admitted to having swallowed a toothbrush in an attempt to commit suicide 20 years ago. His motive to attempt suicide was that he had contracted HIV following the usage of drugs. After the failed suicide he went on with his life. He put aside the uncomfortable episode. He quit drugs, took HIV treatment, got married, and had two healthy children.

The 32-year-old Mohammed Maqsood was taken to the Sanjay Gandhi Medical College and Hospital after he complained of pains in stomach.
Advertisement
‘Chinese man came with abdominal pain having swallowed a toothbrush 20 years ago which doctors removed successfully.’
Read More..
Tweet it Now


The toothbrush remained in his belly until 2014. Then it gave him abdominal pain and inflammation. Doctor Liu Jialin, Li's surgeon, said that the toothbrush had stayed in the stomach and duodenum before sticking into the bile duct. This had caused inflammation and pain. If not treated, the toothbrush could have touched the liver resulting in a fatal infection.


Li's surgeon, Liu removed the toothbrush using an endoscope. The toothbrush did not have bristles, that had probably been dissolved in the stomach.

Doctors removed 152 metal objects from a 35-year-old woman's stomach where they had coalesced into a tumour-like mound.
Advertisement
Li said that he had forgotten the episode thinking the toothbrush had got expelled on its own.

Doctors at the No.3 People's Hospital said that the toothbrush is the strangest item doctor's have found in a patient's intestine along with nails, coins, and lighters.

Watch Out: Stomach Cancer No Longer Just a Disease of the Old

What are COX2 Inhibitors? Why are they safer compared to NSAIDs and which conditions are best treated by ...

Learn What Your Tongue Says About Your General Health