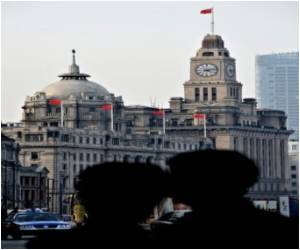 Chinese investor "Auntie" Wang can see the value of her portfolio of metals stocks infront of her eyes as she watches prices at a trading centre in the financial hub of Shanghai.

"The current market situation is heartbreaking," said Wang, a 70-year old retiree who has poured 50,000 yuan ($8,000) of her savings into China's stock market, set up two decades ago.

In a bid to promote the preservation of traditional Chinese medicine, China a launched a massive project to archive ancient medical books.
Advertisement

With the market now hitting over three-year lows, China is trying to prop up prices and introduce reforms to defuse investor dismay, but a slowdown in the world's second largest economy bodes poorly for a recovery, analysts said.


China's economy grew 7.6 percent in the second quarter this year, the slowest pace in more than three years, dragging down corporate earnings. Despite interest rate cuts and government spending, the economy remains weak.

India and China, which are epicenters of a booming economy, are now witnessing a steady rise in obesity. Globalization is the prime accused.
Advertisement
"Everyone thought the economy would find bottom in the second quarter, but that might be pushed back," said Shen Jun, an analyst at BOC International.

"There has not been any substantial change in the economy or market fundamentals."

The benchmark Shanghai Composite Index is now around more than 40-month lows at levels not seen since the height of the global financial crisis.

China fears the anger of small investors could cause social problems, as it seeks to maintain stability ahead of a once-in-a-decade leadership transition later this year.

Already, thousands of investors have voiced support for online calls to halt a flood of new share offers in hopes of stemming the slide. A couple in the eastern city of Hangzhou killed themselves in July due to stock losses.

Only 22 percent of households made a profit from stock investment last year, according to a central bank-backed research institute.

But the commission, headed by former banker Guo Shuqing, has gone beyond lip service, rolling out a series of reforms in recent months.

Planned moves include slashing trading fees by 20 percent from September and a proposal now under consideration to allow listed companies to buy back their own shares for their employees.

The regulator is "exploring" allowing pension funds into the market, though such a move has yet to materialise, disappointing investors.

The watchdog has urged listed companies to raise dividends and allowed foreign institutional investors greater access to the market, which has capitalisation of $3.0 trillion for its Shanghai and Shenzhen bourses.

The commission has also backed the two exchanges in implementing from July stricter requirements for companies to avoid delisting from the market in a bid to improve the quality of listed firms.

Some analysts criticise the timing of the reforms, especially a crackdown on what the government deems speculation, saying they might backfire and harm the performance of the struggling market.

"Launching these short-term methods during a bear market has hurt the market's performance," said Jiang Shiqing, an analyst at Industrial Securities.

"It's like treating a critically-ill patient with strong medicine -- will the treatment cure the disease or kill the person?

But another retail investor at the Shanghai trading centre said some of the nation's 170 million stock investors still had an important lesson to learn.

"Stock markets have risk," said Wei Aiguo, a retired factory worker who has played the markets for more than a decade. "If you want to enter the market it is your business, not the government's."

Adulteration of food with melamine results in the formation of kidney stones and kidney failure, even leading to death.
Advertisement
<< Women 40% Less Likely to Die After TAVI Than Men: Study
Internet Addiction: Causes at the Molecular Level >>

Soy or Soya is a crop which has been cultivated from thousands of years. It belongs to the family of legumes.
Advertisement
News A-Z
A B C D E F G H I J K L M N O P Q R S T U V W X Y Z
What's New on Medindia

Drug Toxicity
News Archive
News Resource
News Category
Five Love Languages Every Couple Should Know Go for a Walk to Speed Up Your Brain Function 5 Types of Tea Women Should Drink Daily Bodychecking Experience Does Not Protect Teen Hockey Players from Injury Yoga: A Powerful Weapon to Fight COVID-19
More News
Sign up for Wellness Consult a Doctor Sign up for Selfcare