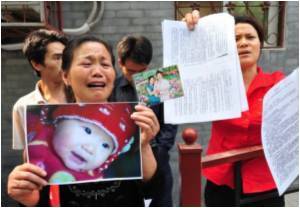 Local courts in Shanxi and Hebei provinces of China have convicted and sentenced 14 people for producing and selling tainted milk powder.

According to China Daily, among the 14 involved in four tainted-milk cases, two received life imprisonment, four received sentences of 10 to 15 years in prison, while the rest received lighter sentences.

The open trials came three years after melamine-contaminated milk powder killed at least six babies and sickened 300,000 others across China.

Chinese leaders have recently called for stern punishments for those who produce or sell inferior products.

More News on:
Pasteurization of milk Types of Milk Why Do We Eat - Nutrition Facts Diet Lifestyle and Heart Disease Pregnancy and Antenatal Care Types of Food Allergies The Acid-Alkaline balance, Diet and Health Acid Base Dietary Balance and its Influence on Our Health and Wellbeing Lactose Intolerance Surprising Benefits of Dairy