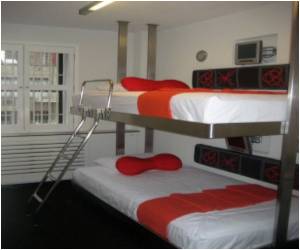 China has followed Japan's lead in the capsule hotel market, amid an explosion of leisure travel in the world's most populous country.

The first capsule hotel in Shanghai opened at the weekend, less than a month before the Spring Festival holiday, when hundreds of millions of people crisscross the country to celebrate Lunar New Year with their families.

China is likely to hold the record of having the 'World's Highest Hotel' when The Shanghai Tower J Hotel completes in 2014.
Advertisement

The hotel has 68 cabinet-sized rooms imported from Japan -- where capsule hotels originated -- each equipped with a power point, clock, light, television and wireless Internet, the China Daily said.

A survey conducted at Melbourne's five-star hotels has revealed some stark insights with most of them adopting unsafe hygiene standards.
Advertisement
"This is a huge bargain compared with other budget hotels in Shanghai," Ta, 33, was quoted saying.

The report said the budget hotel near the Shanghai Railway Station was the first capsule hotel in China to be built to international standards.

No one at the hotel could immediately be contacted for comment.

China's booming tourism industry was expected to host 2.1 billion domestic and international travellers in 2010, an increase of 12 percent over the previous year, according to previous industry estimates.

Formula One Teams Stay In Brothels Due To Lack Of Hotels

Formula One teams are staying in brothels because of a lack of hotels at the Korean Grand Prix.
Advertisement
<< Advances in Camera Lenses and Drug Delivery With Revolution...
Yoga's Many Religious Avatars >>