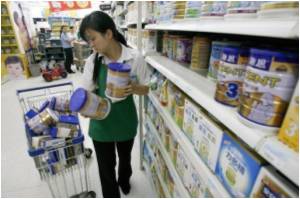 China's quality watchdog has destroyed or blocked the import of a wide range of foreign food and cosmetic products amid concerns that they posed potential health risks, it announced on its website.

The General Administration of Quality Supervision, Inspection and Quarantine (AQSIQ) this week published blacklists of products from a number of nations including the United States, South Korea, Japan and New Zealand.

China, which has seen a string of food safety scares in recent years, is likely to experience similar problems in the future due to the country's vast size, a top official was quoted
Advertisement

All of the products imported in April and May -- including milk powder, jam, chocolate and bath products -- "have been returned, destroyed or converted to other uses" and "were not sold in the domestic market", AQSIQ said.


The safety watchdog did not specify what the "other uses" were.

US food giant General Mills was singled out after its corn muffin powder, pancake powder and cake flour were found to have genetically modified contents or excessive aluminium, the agency said.

Researchers from Kansas State University have found that independently-owned ethnic restaurants have a considerably higher number of food safety violations than their non-ethnic
Advertisement
Other companies named included South Korea's Lotte, US group Kraft Foods and Britain's Marks and Spencer, according to the statements.

China is regularly hit by product safety scandals, mainly involving domestically made items, despite government pledges to clean up the food industry.

In 2008, the industrial chemical melamine was found in the products of 22 Chinese dairy companies in a massive scandal blamed for the deaths of at least six infants and for making 300,000 others sick in China.

China's government has repeatedly said all tainted milk products were seized and destroyed after the scandal and that there was no further public health threat, but reports of contaminated products continue to trickle out.

A genetically modified strain of maize, banned in some EU countries, poses no risk to health or the environment, the European Food Safety Authority declared on Tuesday.
Advertisement
Advertisement

Nail biting can occur as a result of anxiety, boredom, or imitating others. It is usually observed in ...
This site uses cookies to deliver our services.By using our site, you acknowledge that you have read and understand our Cookie Policy, Privacy Policy, and our Terms of Use  Ok, Got it. Close
×