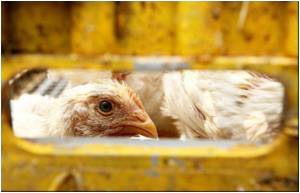 Southern China Health authorities are advising people to stay calm after a man who infected with bird flu virus died over the weekend, the official Xinhua news agency said on Monday.

The man, surnamed Chen, died on Saturday in Shenzhen -- a boomtown that borders Hong Kong where thousands of chickens have already been culled after three birds tested positive for the H5N1 avian influenza virus in mid-December.

The Shenzhen Disease Control Centre confirmed that Chen, a bus driver, had contracted H5N1 from poultry, but they were still trying to find out where he acquired the virus.


Chen is China's first reported human case of the deadly disease in 18 months.

"The virus cannot spread among people" and "there is no need for Shenzhen citizens to panic," Xinhua said, citing a statement from the centre.

It might not be the plague yet, but the bird or avian flu scare has acquired this nasty habit of sending a shiver down the spine.
Advertisement
Chen developed a fever on December 21 and was taken to hospital four days later, and diagnosed with severe pneumonia, the health department in Shenzhen, a city of more than 10 million people, said in an earlier statement.

The 39-year-old had apparently had no direct contact with poultry in the month before he was taken ill, nor had he left the city, the department said.

The H5N1 virus is fatal in humans in about 60 percent of cases.

Chinese and Hong Kong authorities have been working closely together since December 21 after live poultry supplies were suspended to the glitzy financial hub following the discovery of infected birds.

Authorities in Hong Kong have raised the bird flu alert level to "serious" since they discovered infected chickens, resulting in major disruptions to poultry supplies over the busy Christmas period.

Pneumonia is a lung infection that can be caused by a bacteria or a virus. It causes inflammation of the alveoli or the air sacs of the lungs.
Advertisement
<< Lady Gaga Desires to Get into Indian Food Coma
2011 Most Influential Hairstyles: Emma Watson's Pixie and J... >>