Children Should Come Out and Play With Neighborhood Kids 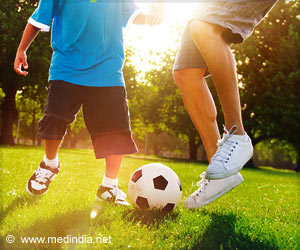 In this gadget-filled world, children can be spotted with Ipads, mobile phones, PSBs and computer games everywhere. But, it is very integral that kids get used to the habit of going out and playing with their neighborhood kids.

A new study says that parents who home-school their children may think that putting them into organized sports and physical activities keeps them fit but the young need much more.

Advertisement
‘Children are getting only 20-30 minutes of physical activity compared to the WHO recommendation of one hour of aerobic exercise for kids every day.’

The researchers, including Laura Kabiri from the Rice University, said the problem lies in how much activity is part of organized regimen.


The authors said parents should give their children more time for unstructured physical activity every day.

"Parents know if they ... don't see their kids breathing and sweating hard, then they're not getting enough exercise," Kabiri said.
Advertisement
"So there should be more opportunities for unstructured activity. Get your kids outside and let them run around and play with the neighborhood kids and ride their bikes."

According to the World Health Organisation, children should get about an hour of primarily aerobic activity a day. But other studies have noted children involved in non-elite sports actually get only 20-30 minutes of moderate to vigorous exercise they require.

For the study, published in the Journal of Functional Morphology and Kinesiology, the researchers studied data gathered from 100 home-schooled children aged between 10-17.