Children in Rural India Learn Math Through the 'Skype School' 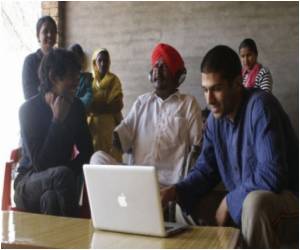 The electricity keeps cutting out, the Internet connection is crackly and the speakers don't always work, but Santosh Kumar knows that 20 pupils far away in eastern India are relying on him.

Once a week, Kumar uses the Skype computer programme to teach maths to children in Chamanpura, a poor village in the struggling state of Bihar, 600 miles (970 kilometres) from his two-storey house in the suburbs of New Delhi.

Entrepreneurs, Technology and the Rural Indian Rupee: The New Market

India's hunger for new technology is as sharp in its countless small villages as in its shiny office towers or shopping malls -- and businesses are waking up to an area of massive potential growth.
Advertisement

The free Internet service allows the class to see, via a projector, Kumar's tutorial which includes an animated tale about a greedy priest and a wily countryman to teach the students about numbers and the concept of infinity.


"The first time I did this, they were really excited by the technology, now they don't care," Kumar said. "It's normal to them."

Kumar, a successful 34-year-old engineer, grew up in Chamanpura village before battling his way to a place at the prestigious Indian Institute of Technology (IIT) and on to a well-paid job in the Indian capital.

Social shaming techniques work better in making people adopt proper sanitation habits in rural India, a new study has suggested.
Advertisement
"It's an uphill task to bring education to villages," he said, recalling his teenage years when he would cycle eight miles to college in a nearby town.

Kumar's cousin Chandrakant Singh, also now a well-paid engineer, decided during a trip back to the village to set up a school for children aged between 6 and 12.

"I wanted to provide a world-class education to students in the remotest place on Earth," said Singh, who remembers studying at night under the dim light of a kerosene lamp.

Unfazed by the fact that Chamanpura has no mains electricity, or by the refusal of experienced teachers to travel to Bihar, Singh approached his friends for donations to fund the Chaitanya Gurukul boarding school.

He installed two power generators and organised training for 16 local teachers before hitting on the idea of using Skype to connect students with professionals across India.

"The world's greatest teachers don't want to go there, so I thought maybe we could use technology to help our students learn faster," he said.

The school opened its doors in April 2010, offering admission to 500 students, 50 of whom pay nothing, with the rest charged according to their parents' ability to afford fees.

The Skype lessons take place in the evenings after the day's regular classes and at weekends.

Kumar was on board from the beginning, adamant that he could help the students and give them more "clarity" on what they learnt in class.

"Some of them were curious, others got intimidated, I had to work with them to rid them of their fear," he said, pointing out many of them had never seen a computer before.

"Now it's like television for them, it entertains them and hopefully they learn something," he said during another power outage. "The technical problems happen often. It's extremely frustrating but we carry on."

During his maths lesson, some students appeared engrossed by the video, while others chattered inaudibly in the back rows.

But they snapped to attention during the question session, with everyone answering correctly.

"It's a very different way of teaching, it helps me remember what I learn better than if I just read it," Anmol Kumar Jaiswal, 11, told AFP via the two-way Skype link.

"I like these lessons, it helps me understand things better," she said shyly. "I also want to become an engineer like my teacher."