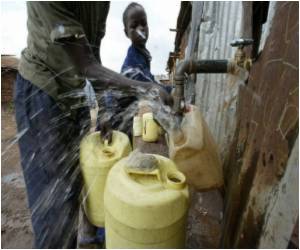 A research done by the University of East Anglia research shows children at risk from rural water supplies.

Children drinking from around half the UK's private water supplies are almost five times more likely to pick up stomach infections - according to research from the University of East Anglia (UEA).

Celebrate a safe Diwali with festivities, make your Diwali special for yourself, your family and your friends
Advertisement

Research published today in the journal PLOS ONE shows children under 10 who drink from contaminated supplies are suffering around five bouts of sickness or diarrhoea a year.


This figure is similar to the rates of infection among children in the developing world.

Around 1 per cent of the UK population are served by private supplies - such as wells and boreholes. In Europe the number is as much as one in 10. And many more drink from such water supplies as visitors and while on holiday.
Advertisement
But half of all private water supplies in the UK do not meet water safety regulations.And while water-borne bacteria does not appear to affect adults and older children, the under 10s are particularly at risk of picking up stomach infections.

Researchers investigated whether people drinking from contaminated supplies are more at risk than those drinking from supplies that comply with safety standards - and particularly whether children are more susceptible to disease.

They studied more than 600 consumers in Norfolk, Suffolk and Herefordshire for 12 weeks. Those surveyed kept a diary of symptoms including diarrhoea, vomiting, stomach pains, nausea, headache, and fever.

They also collected samples of drinking water from each household which were tested for the faecal bacteria E. coli, Coliform and Enterococci.

Prof Paul Hunter, from UEA's Norwich Medical School, said: "We found a particularly high incidence of diarrhoea in children under 10 in homes provided by water which was contaminated with bacteria. The results showed that these children would suffer almost five incidents a year - a risk of illness similar to that reported in developing countries.

"This is a serious concern. As well as children being more at risk, they also suffer the most from an episode of diarrhoea - with greater rates of hospitalization and higher mortality rates.

"It is very important that households reliant on private water supplies, where children under 10 live or visit, are identified and frequently tested for pollution. Our recommendation to parents is to either ensure adequate well-maintained treatment such as chlorination or filtration, or provide alternate sources such as drinking bottled water."