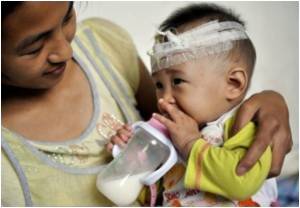 Acute child malnutrition is taking its toll on Nepal's children who are wasting away or dying in large numbers.

Padma Biswokarma covers her young son with a blanket as she breastfeeds, a broad smile spreading across her face.


Two years ago doctors had given Rohan little chance of survival after he was born weighing just 750 grams (one pound, 10 ounces), barely a quarter of the minimum healthy weight for a newborn.


Today he weighs seven kilograms, still dangerously light, but his measurements are improving and health workers are optimistic.

"When he was born no one believed he would survive," says Padma, 24, as she cradles her child outside her mud home in Mangalsen, the main town in the remote hill district of Achham in western Nepal.

"I get really worried every time he is sick, every time he gets a fever," says Padma, 24, as a health visitor measures the circumference of Rohan's arms.

Rohan's story is all-too-common in Nepal, where a child malnutrition epidemic described by humanitarian organisations as a "silent emergency" is claiming the lives of thousands of infants each year.

Nepal is one of the world's poorest countries, with more than half the population living on less than $1.25 a day.

Development has been severely hit by the 10-year civil war between Maoist rebels and state security forces that ended in 2006.

According to government statistics 1.7 million children -- nearly half of all under-fives -- suffer from chronic malnutrition, a long-term condition also known as stunting.

The figure rises to 60 percent in Achham, one of the poorest areas in South Asia where contaminated water and poor sanitation result in deadly outbreaks of cholera during the monsoon season.

Acute malnutrition, a condition known as "wasting" blamed for half of Nepal's infant deaths, is thought to affect 18 percent.

Mark Arnoldy, an executive director of the Nyaya Health charity who worked in Achham for three years, describes malnutrition as "a nasty cocktail" of poor food security exacerbated by bouts of diarrhoea, pneumonia and worms.

"In regard to breastfeeding, 25 percent of women that give birth in Nepal do so while malnourished," he said. "So breast milk is often insufficient."

Development agencies say nearly a quarter of Nepalese still have no access to even basic health care.

Saru Nepali, 25, is forced to leave her four children to fend for themselves when she heads from their home in the village of Biraltoli to earn money for food by collecting firewood in the jungle.

While she is away her 18-month-old son Nilesh, unable to feed himself, is slowly starving and is dangerously malnourished.

It is a grim irony not lost on Saru, who knows her entire family will go hungry if she stops working to care for Nilesh.

"The older brother is supposed to feed him but we don't know if he does or not," says community health volunteer Mangala Biswo-Karma.

"She has a husband but he works in India and is often not here. I've been looking after Nilesh for a long time but there has been little improvement and he is still suffering."

The mix of peanut butter, dried skimmed milk, vitamins and minerals requires no water, thus cutting down the chance of contamination.

It is a major leap forward in a country where as little as 20 years ago most people still relied on local shamans or witch doctors if they fell ill.

"We have trained well over 1,500 female community health volunteers to deliver (micronutrient powders), and they have so far reached 30,000 mothers -- 70 percent of the total -- with young children," said Maheshwar Shrestha, chief of the district public health office in Rupandehi district, southern Nepal.

But for many children the programmes have come too late.

Chandra Nepali had been cradling her severely ill eight-month-old son Shere when she realised he had stopped moving or making any noise.

She rushed him to hospital but doctors were unable revive him, concluding he probably died of a number of factors exacerbated by malnutrition.

"If he had lived he would have been six years old now," Chandra says as she holds her baby girl Kabita, 20 months, close to her chest.

Kabita, too, has acute malnutrition, although the sachets of powdered nutrients are stabilising her condition.

"She was healthy when she was born but she started having problems after she got sick with pneumonia," says Chandra, 23. "I've always breastfed her but she wasn't able to feed properly when she was ill.

"I was worried that my second child was also going to die, but she is improving and I'm really happy."